Theatre Token to be sold in our 19th August 2015 Auction

We have been instructed to sell this inscribed 19th century bone theatre token in our 19th August 2015 Coin Auction.

The theatre in 19th century London was an extremely popular pastime for the upper classes of society. The particularly wealthy subscribed or leased a theatre box per season. This practise entitled you to visit a particular theatre, usually on a certain day of the week and be guaranteed a seat in your box. Only the very wealthy could afford to do this. To prove their right to the box, ivory discs or tokens were issued, which were often personalised with the name of the subscriber and the number of the particular box they had leased.

This 19th century ivory theatre token, is inscribed on the obverse ‘Her Majesty’s Theatre 1847’ and the reverse ‘The Prince Louis Napoleon, Stage Box 6, 4’. 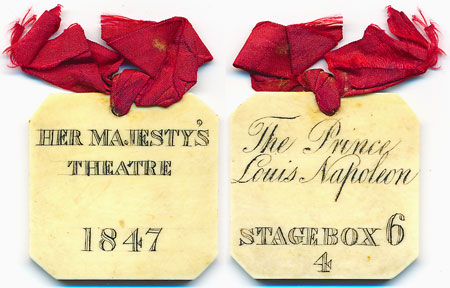 Louis-Napoléon Bonaparte was the nephew and heir of the famous Napoleon Bonaparte of Waterloo fame. He became the first President of the French Second Republic and later, as Napoleon III, the Emperor of the Second French Empire. He was exiled from France and ended his days in England in 1873.

Napoleon was exiled from France several times in his lifetime, and it was because of this he found a second home in London. After inheriting a large fortune from his deceased mother in the late 1830’s, he took up residence, ironically on King Street, in St. James’s where he passed his time hunting, socialising with the English elite and attending the theatre.

The prince Louis Napoleon or Napoleon III as he would become, was resident in London in 1847 and it is therefore possible (though not proven), considering his wealth, enjoyment of the theatre and standing in society, that he may have subscribed to Box 6 at Her Majesty’s Theatre.

The full 19th August 2015 auction catalogue will be published on our website in the next few weeks, and you can keep an eye on our Twitter and Facebook accounts which will include updates of our latest auction news.

Are you thinking of selling your coin or token collection or perhaps part of it? Would you like us to value your collection of coins and give you advice on how best to market it? Visit our coin department page for more information, or call us on 01926 499 031 and ask to speak to one of our experts.