While going through a large Commonwealth collection, I came across some simply produced stamps from Uganda that I didn’t recognise and which I thought deserved some more research. The Stanley Gibbons catalogue provided some basic information but it took a bit more work to find out the full story.

The stamps were issued in the Uganda Protectorate, which was established in 1893 when lands were transferred from the East Africa Company. Prior to the Missionary issues, letters to the UK had taken about 3 months to arrive by sail and steamship, until work on the Mombassa to Port Florence railway reduced that to 28 days.

The first person to suggest a postal service for Uganda was Mr G Wilson, later Deputy Commissioner. The stamps, for the use of the Catholic missionaries, were produced on a typewriter, the only one in Uganda at the time, taken out by the Rev E Millar in 1882. Initially they were typed in black, then later in violet when Rev. Miller was sent a much needed replacement ribbon.

In a diary entry dated March 14th 1895, Rev. Miller wrote ‘At lunch time Wilson looked in and wanted us to help him with his idea of a postage system in Uganda. I consented to print some stamps for him, and printed him off a sheet of all values, from 10 to 50 shells.’ 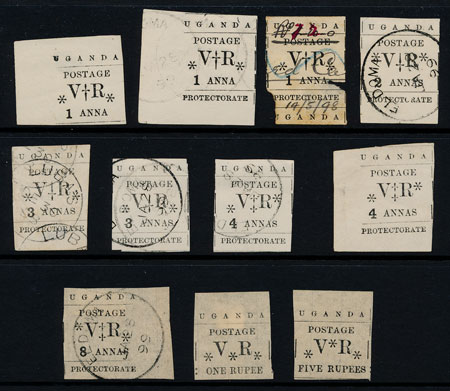 The postal service commenced on March 20th 1895 and a notice in the local language, Luganda, was placed on the single post box put up by Wilson. The stamps were priced in Shells, literally seashells otherwise known as Cowries, which were used as the local currency (at the time 1d converted to about 12½ Cowries).

By the autumn of 1896, demand for stamps had risen so much that Rev. Miller's sterling work on the keyboard was unable to cope, so a new method of production had to be found. Luckily, the Church Missionary Society had a printing press that they agreed to use to produce a new design of stamps. The Rev. F Rowling designed the new stamps, set up the type and also supervised the printing by a native boy who, fortunately for collectors, inadvertently managed to create various inverted varieties. Also, being short of an ‘o’ in the plate of 16 stamps, a different type ‘o’ was substituted leading to the variety listed in SG.

The first printing of the new stamps were sent to the Government for distribution on November 7th 1896 and consisted of 30,000 stamps. At first the stamps were cancelled, as with the typewriter issues, by hand, until cancellers supplied by Waterlow & Son arrived in January 1898.

The copies that we have are printed values from 1a to 5r, mint or used with cds cancels from Eldoma or Lubas, apart from a 1a with hand cancel and dated 14/5/98. They will be offered in our August stamp auction.