We have been instructed to sell an unusual Temple Bar commemorative issue in our 21st October 2015 Coins, Medals and Banknotes Auction.

Temple Bar was one of eight original gateways that lead into the city of London. It originally stood where Fleet Street now meets the Strand and is the only one of the eight gateways that survives. It is first mentioned as far back as 1293 and is thought to have been named due to its proximity to the Temple Courts Law district.

It is mentioned throughout history as being a stopping place in royal processions into London proper, such as the funeral of King Henry VII’s Queen, Elizabeth of York. Elizabeth I also paused there to accept the ceremonial keys to the city from the Lord Mayor after England was victorious against the Spanish Armada.

Due to its declining state of repair King Charles II commissioned a new Temple Bar be built from the expensive Portland Stone showing the importance of the gateway to the city.  It was completed in 1672 reputedly by Sir Christopher Wrenn who was made famous for building St. Pauls Cathedral.

In 1878 the arch became a cause of traffic congestion and was considered too expensive to maintain. It was therefore taken down stone by stone and numbered so that it could be erected elsewhere at a later date.

The commemorative medallic issue offered in our 21 October 2015 auction was made to mark this event. Made from lead, it depicts an elevation of the decorative façade of Temple Bar. It is 101mm in diameter and is mounted under glass with a circular brass frame by Foot and Tebay. 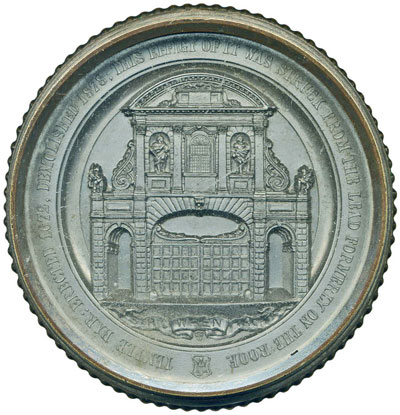 So what became of the deconstructed Temple Bar? In 1880 brewer Sir Henry Meux purchased the stones and installed them as a gateway to his estate Theobalds Park, Cheshunt in Hertfordshire.

There it stood until in 2004 it was relocated to the city where it was built. It now stands in Paternoster Square in London next to St. Paul’s Cathedral.

The full 21st October 2015 auction catalogue is now on our website. Keep an eye on our Twitter and Facebook accounts which will include updates of our latest auction news.