Over the course of the year our valuation team here at Warwick & Warwick often receive material that is of little, or relatively low value.  The decision is sometimes then made that the sale of such material is not viable given the costs associated with selling it, and the owners are advised to this effect.  In these instances Warwick & Warwick will offer to keep the property until we have enough to amalgamate several of these items or collections, auction them, and donate the proceeds to charity.  Similarly, we also receive property from time to time with instructions to simply sell the material and donate the proceeds to charity.

Earlier this month we raised a total of £550 from the sale of such material and were in a position to present a cheque for this amount to a representative of our chosen charity; The Shakespeare Hospice; an independent local charity providing specialist palliative day care for people living in the Stratford upon Avon district. 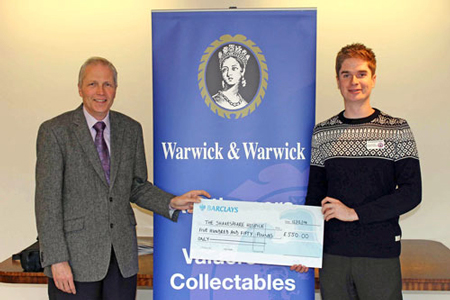 Warwick & Warwick would like to thank all of our customers who allow their property to be auctioned for charitable causes, as without such generosity we would not be able to continue to support such worthwhile local charities.