Our stamp auction on 4th March includes one of the great rarities of Hong Kong stamp collecting, the 1880 10c on 12c with doubled surcharge. 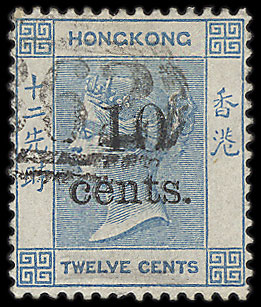 Hong Kong joined the Universal Postal Union in 1877 and this, along with changes to the currency, meant that new postal rates were introduced in 1880 requiring new denominations of stamps to be issued and these were ordered from the printers De La Rue. Before they were available, the Government printers Noronha and Sons were asked to provide surcharged provisionals of the new denominations (SG 23-27).

This surcharging resulted in some of the rarest Hong Kong errors and, as they have been studied over passing years, new finds have been added to catalogues. The current recognised surcharge errors are the 5c on 8c inverted or double, the 10c on 16c inverted and added in recent years, the 10c on 12c doubled surcharge.

The stamp being sold in our March auction is used with a ‘B62’ cancel and comes with a 2014 BPA certificate. The SG catalogue price for a used example is £50,000.

This is a rare opportunity to obtain one of the great Hong Kong classics and interest is bound to be high.