Zeppelin mail, more than a flight of fancy

Zeppelins have always been of much interest, particularly in the ‘golden age’ of flights from the late 1920s, when large crowds would gather to watch the airships arrive and depart. Luckily for philatelists, a large quantity of Zeppelin related postal material has survived from that time, though not often of the quality of the collection we are offering in our October stamp sale.

The collection of 25 cover or cards, in an album, is further illustrated with many contemporary press cutting and photos which tell the story of the airships when they circled the world.

One of the more unusual items is from a May 1929 flight to the USA, which was delayed due to engine problems. The post carried on board was stamped with the message ‘Delivery delayed because of accident on first flight’. 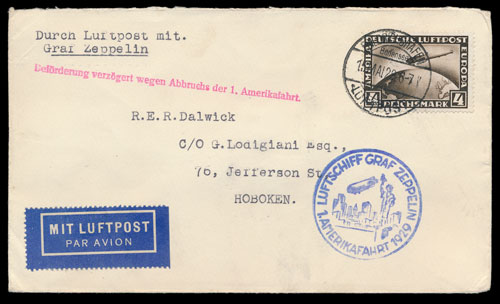 This card, addressed to Switzerland, was carried on the 1930 South American Flight and bears the German overprinted 2M & 4M stamps and German & American cachets. 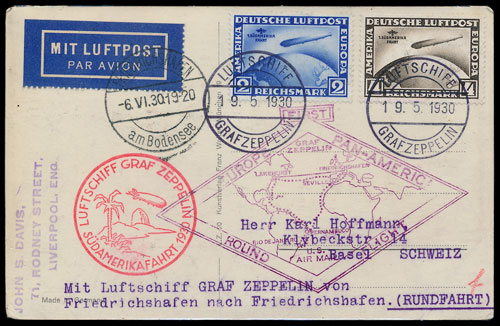 The British Post Office at first refused to accept mail that was destined to be carried by Zeppelin, so examples are rare. The collection includes a card with an arrival stamp at Friedrichshafen on 20th August 1931 and also the Tower Bridge cachet of the England flight. 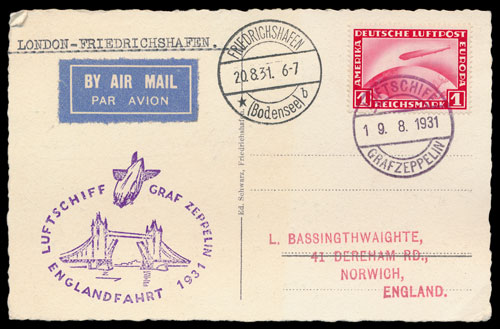 In September 1931 Graf Zeppelin carried mail from the Mophila Exhibition. This card has a Zeppelin Mophila cachet and the Polar Flight overprinted 1M. The front has a picture of the Zeppelin mail room as staff sort the large quantities of post carried on the flights. 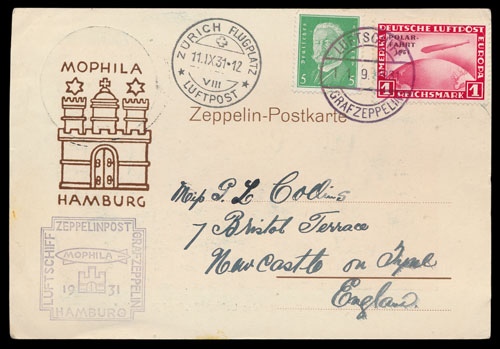 This fascinating collection is to be offered in our October stamp auction as a single lot and will no doubt create a great deal of excitement.