A fine collection of Zulu weapons will offered for sale in our 9th December medal and militaria auction with varying estimates.

The Zulu nation’s reputation as a fearless and well disciplined army was brought sharply to the British public’s attention with their victory at the Battle of Isandlwana on 22nd January 1879 and then the fierce Battle of Rorke’s Drift that evening and into the following morning. The photo below shows part of the Isandlwana battlefield; the cairns of whitened stones cover multiple graves of British and Colonial troops killed in the battle and buried several months later in May, when identification was nigh on impossible in most cases. The British suffered over 1300 casualties in this staggering defeat at the hands of a native army, and these cairns are dotted across the battlefield. 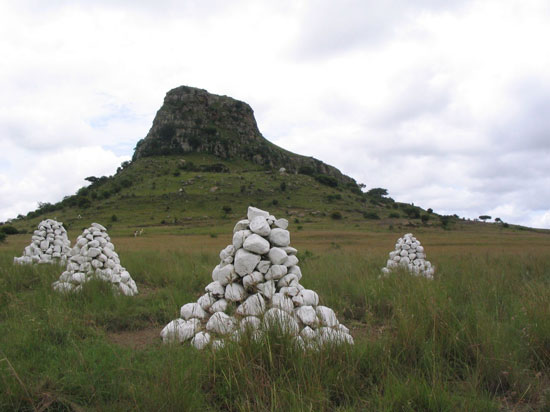 Lot 203 is a Zulu 19th century darkwood axe, the haft decorated with iron wire binding in 4 sections, overall 71cm in length, axe head 18.5cm long. The axe was not a principle battle weapon and was only carried by indunas. This example is offered with an estimate of £300.

Lot 204 is a Zulu 19th century ceremonial or induna’s darkwood knobkerrie with a small head, the haft largely covered with zig zag pattern iron wire binding in 4 sections with an overall length of 71cm. This example is offered with an estimate of £200.