A unique Naval General Service Medal and Imperial Austrian Order of Leopold pair to Captain John Duff Markland is offered in our 21st April 2021 medal and militaria auction with an estimate of £12,000 to £15,000. 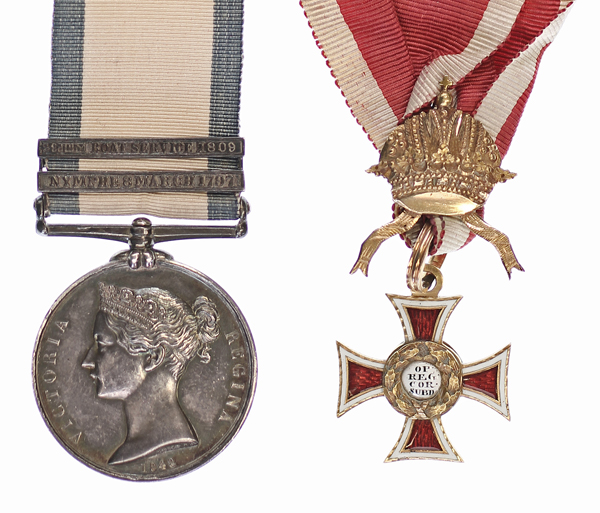 John Duff Markland was born in Leeds on 14th September 1780. He entered the Navy as a midshipman on Hebe 27th May 1795, followed by La Tourterelle, Seahorse and then Nymphe. Nymphe was a 5th Rate frigate (32 guns) captured from the French in 1780. On 9th March 1797 Nymphe and San Fiorenzo sighted 2 French ships heading for Brest. After a quick action of 30 minutes, they captured both ships, the frigate Resistance (48 guns, 345 men) and corvette Constance (24 guns, 189 men) with no casualties or damage to the British ships. Nymphe was one of the ships involved in the Spithead Mutiny in April and May 1797 where sailors of the channel fleet campaigned for better conditions. The crew accused the Capt Cooke and his lieutenants of the Nymphe of excessive flogging.

He then went to Royal George and then re-joined Capt Cooke on the Amethyst where in 1801 they captured la Dedaigneuse (36 guns). He was promoted Lieut and moved to Malta (80 guns) 8th June 1801, Albion 29th November 1802 where he was present at the capture of the frigate La Franchaise near Brest on 28th May 1803 and the corvette La Clarissa in Bay of Bengal Jan 1804. He later served as First Lieut until Dec 1805 when he was invalided from the East Indies. On his return to England he was promoted Commander on 22nd January 1806, appointed in command of the brig Bustard (16 guns) 22nd January 1806. Bustard helped in the capture of a convoy of 6 gun boats of the Italian Marine and 10 coast traders on 28th July 1809. The Bustard was part of Capt West’s squadron operating in the Gulf of Venice blockading the port of Trieste when the convoy took shelter in Douin which was defended by a strong castle. West ordered the sloop Acorn, Bustard and the boats from his ship the Excellent to try and cut the convoy out. The boats landed their crews ashore around midnight and covered by the fire of the 2 sloops, captured every vessel in the harbour. West stated “The very masterly and complete manner in which this service has been performed by Captains Clephane and Markland excites my highest admiration.” Captain Clephane also praised Markland “His high sense of the conduct of Captain Markland, both by his leading into a place so little known, and by the well-directed fire kept up by him.”

In July 1810, the Bustard captured and destroyed 9 enemy ships off the coast of Calabria. His Flag Officer wrote “I highly approve of your conduct, and of Lieut John Hilton, which I shall not fail to make known to C-in-C. I am very happy that only 2 of the crew of H.M. sloop under your command were wounded in the execution of this important service.” For the next 3 months, Markland commanded the sloops stationed at Messina, to protect Sicily from the threatened French invasion. On 24th July the Bustard and Halcyon destroyed 2 heavily armed feluccas near Cape del Arme, where his Lieut Hilton was wounded 4 times. During this period, the Bustard was repeatedly in action with the French land batteries and flotilla. For his outstanding service and gallantry in the defence of Sicily where the Bustard captured a total of 25 prizes and destroyed 39 ships, he was promoted to Captain in command of the Ville de Paris (110 guns) bearing the flag of Rear Admiral Freemantle 6th February 1811. He followed Freemantle to Rodney 21st March 1811 and then Milford (74 guns) 1st August 1811. Markland commanded Milford for 2 years and they were heavily involved in the Adriatic in 1813 including the capture of Istria, Porte Re, Bocca Re, Rovigno, Piran, Capo d’Istria, the landing and attack on Ragosniza where a French battery was destroyed, 6 24 pounders, ammunition and stores captured and brought off, along with 63 French prisoners.

With the French Army in retreat up the coast, Freemantle’s squadron were ordered to blockade Trieste 5th October 1813. Markland and Captain Black volunteered to attack the dockyard, which despite being strongly defended, might be taken by surprise. They landed in the dark and captured the complete arsenal and everyone in it, who along with a quantity of stores were brought off in triumph. They also rendered all guns unserviceable and disabled a large frigate.

On 11th October the marines and 2 field guns were landed under Markland’s command to assist in the siege which lasted until 29th. Freemantle wrote, “I have to thank him for exerting himself in every way; particularly in the arrangements of stores and provisions. We have at times had 1200 men on shore, at work and in the batteries, and the general good conduct of the officers, seamen and marines, with the harmony that has subsisted between the Austrian troops and our people is quite gratifying to me. When we opened against the citadel it contained 800 Frenchmen, 45 large guns, 4 mortars and 4 howitzers. The consequences of taking this place will be felt throughout the country.” Markland resigned his command of Milford on 31st October 1813 and returned home. He was appointed CB in June 1815 and later presented with the Order of Leopold “In testimony of his Imperial Majesty’s approbation of the distinguished services rendered by him at the capture of Trieste, and the other operations in Italy during the campaign of 1813.”

He was appointed Retired Rear Admiral on 1st September 1846 and died aged 68 while living in Bath on 28th September 1848. He only just lived long enough for the NGSM to be issued.