A 1793-1840 Naval General Service Medal with the highly sought after Trafalgar clasp to Midshipman Gilbert Kennicott is offered in our 17th April 2019 medal and militaria auction with an estimate of £16,000. 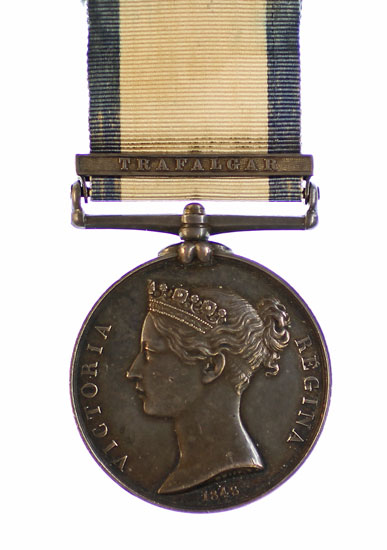 The Naval General Service Medal was instituted in 1847 and issued to surviving claimants from 1848 who had served in 230 major battles, minor engagements and boat service between 1793 and 1840. The Battle of Trafalgar is the most iconic naval battle of this period and 1710 men survived to 1847 to submit their claim for the medal and clasp and it is the status of a medal to a participant of one of Britain’s greatest sea battles that makes it so desirable to collectors.

Gilbert Kennicott was born in 1789 and entered the Navy as a 1st Class Volunteer on HMS Venerable bearing the command flag of his patron Lord Collingwood. He followed Lord Collingwood as a Midshipman to HMS Culloden, then HMS Prince, HMS Venerable again, HMS Dreadnought and HMS Royal Sovereign.

In October 1807 he was appointed Master’s Mate of HMS Hind. While on board HMS Hind in the Mediterranean, he was put in charge of a small Greek vessel which unfortunately was wrecked on the Cyprus coast in foul weather and he was taken prisoner by the Turks who kept him captive until late 1809. After his release he joined HMS Seahorse, and then his patron Lord Collingwood appointed him Lieutenant on his ship HMS Ville De Paris on 22nd August 1810, and then to HMS Minorca. While on the Minorca, he was again placed in command of a detained American vessel with orders to sail it back across the Atlantic to the UK. The captured crew were also on board, and with aid from 4 British seaman recaptured the vessel and sailed her into Marseilles. During the struggle for control of the ship, Kennicott was narrowly missed by 2 pistol shots fired by one of the prisoners. A letter from Master’s Mate Thomas Hamilton who was on board with Kennicott, recorded “Lieut K and myself made an attempt to force way up the cabin companion which they repulsed by firing two pistols at his head with double charges in them, but fortunately them missed him.”

He was now a prisoner of the French and held in Verdun until the conclusion of the war and the final defeat of Napoleon. In April 1815 he was appointed to HMS Mosquito, then HMS Leveret and from 1836 he was employed in the Coast Guard and promoted Commander on 9th November 1846. He died in 1874 in Elham, Kent.

This is a rare casualty medal to an officer who was severely wounded and in the thick of the battle, sold with a considerable quantity of copied research.

Have you acquired or inherited a unique medal or piece of wartime memorabilia and want to discover its value?

We'll be happy to conduct a fast and accurate militaria valuation for FREE - with no obligation to sell.