Behind the Overprints: The Italian Social Republic 1943-1945

In September 1943 during the later stages of World War Two Italy was broken apart, Germany was to seize control of the Northern half of Italy and quickly move to free Duce Benito Mussolini (who had recently been imprisoned by the Allies). Once freed Mussolini was taken to Rustenburg to meet with Adolf Hitler. Despite Mussolini’s poor health and his desire to retire, Hitler required him to head the new Fascist state in Italy and after threatening him with the destruction of Milan, Genoa and Turin Mussolini reluctantly agreed. He was placed in power as both the head of state and Prime minister, establishing a satellite regime over the newly German-occupied zone, his liberation made it possible for the new German-dependent Fascist Italian state to exist. The Italian Social Republic was proclaimed on 23rd September 1943.

This geo-political change in Italy’s structure had a number of consequences, of which one of these was in its production of postage stamps. The Italian Social Republic was to have its own sets of stamps rather than the ones formerly used when the nation was whole. These years can be separated into three different periods:

During this period stamps from the Italian ‘Imperial Set’ (1929-42) were overprinted in red or black with the letters G.N.R (Republican National Guard). There were two printings of these issues.

The Italian Social Republic continued overprinting the Imperial sets in Rome, Genoa, Turin, Florence, Milan and Verona with the words “Repubblica Sociale Italiana.”  Alongside these words was a depiction of the ‘Fasces’, an ancient symbol of power adopted by the Republic similarly to how the Nazi’s adopted the Swastika. The Fasces, a bundle of sticks carrying an axe, represented power – the sticks implying the strength of unity (the bundle stronger than the individual) and the axe an illustration of force. This overprint was also administered to Postage dues, Authorised Delivery, Special Delivery and Parcel Post stamps (see Lot 476 in our November 7th sale). 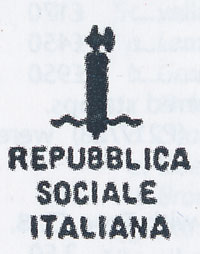 A set of four definitive stamps were issued, these stamps featured ‘destroyed monuments’, the first two values depicted the Merchants Arcade in Bologna and the Basilica of St. Lorenzo in Rome – both of these monuments had fallen victim to substantial damage at the hands of Anglo-American bombing during the summer of 1943 – making these designs politically charged. Furthering the visual propaganda of the designs was the representation of a drummer on the two remaining values, he is seen marching and shouting “All’armi, all’armi” the first and most significant verse in the famous fascist song Fasci Italiani di Combattimento (The Italian Fasci of Combat). The initial four values were printed in Rome (20c and 25c) and Novara (30c and 75c). Further designs were issued in August 1944, with a second “Destroyed monuments” set featuring ten designs and one express stamp, the printing of this set was entirely based in Novara and like the previous renditions featured buildings damaged by aerial bombing. The shift in print location interestingly points to the changing developments in Italy at the point of printing, the resultant factor of Mussolini and his Republican governments northward retreat.

The Social Italian Republic collapsed in April 1945 after the allies continually marched northward through German defences. When Mussolini realised all was lost he tried to flee to Switzerland, his attempts to disguise himself in a Luftwaffe overcoat and helmet proved unsuccessful and he was captured by Italian partisans. On April 28th 1945 he was executed beside Lake Como, his body put into a van and transported to Milan. In Milan the body of Mussolini was hung upside down from a petrol station for all to see – the Social Italian Republic had lasted nineteen months.

Following the collapse these postal issues were no longer valid, despite this they continued to be used in the North of Italy at face value primarily due to delays in receiving new consignments of stamps from Rome.

The stamps produced during the existence of the Italian Social Republic act as a very useful visual stimuli to the history and intentions of their regime. The designs and iconography are clear propaganda tools that developed from the initial ‘fasces overprint’ to the representations of historic buildings damaged by opposition forces. The changed print location subtly tells the story of retreat and indicates the beginning of the puppet states downfall. The politics and history entrenched on the surface of these stamps serves to prove the mirror-like ability of philatelic material in representing the different storylines of each nation they stem from. 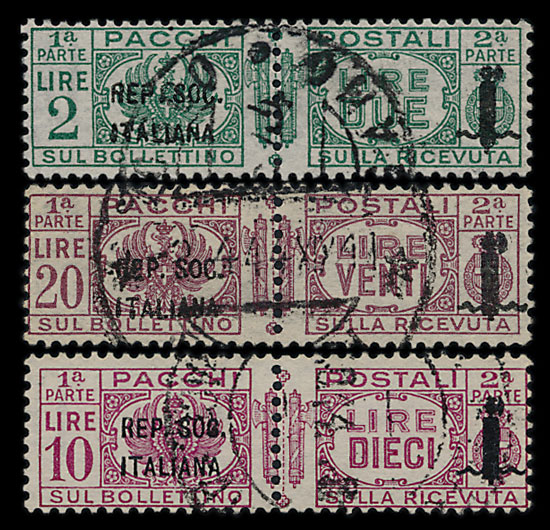 Lot 476 in our upcoming November 7th sale features examples of stamps from this period. The 1944 Parcel Post 2L, 10L and 20L come in unsevered pairs and are fine used. Each feature the ‘Rep Soc Italiana’ and ‘fasces’ overprint and come with Bolaffi photo certificate (1982). The full catalogue is available on our website which also has details on how you can place bids. For further updates keep up to date with our Twitter and Facebook pages.