Corrado Mezzana, Back to the Drawing Board 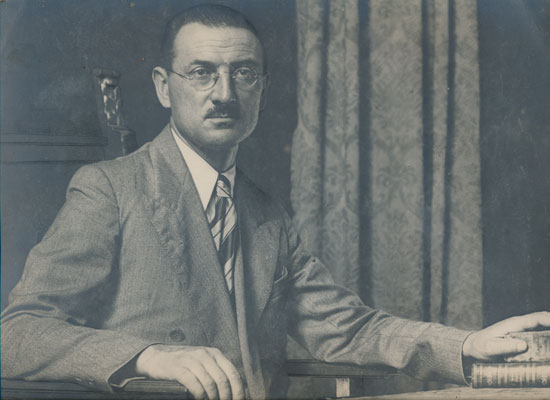 Corrado Mezzana, born in Rome on June 7 1890, is viewed as one of the key figures in Italian stamp design during the 20th Century. He designed many of the Italian stamp issues of the 1930s, 1940s and 1950s, as well as some issues for San Marino and the Vatican. Primarily an artist, he trained at the Institute of Fine Arts and the University of Rome attending the studios of landscape painters and life drawing classes. He later became fascinated with architecture under the tutorage of G. Giovannoni and F. Hermanin, and obtained the qualification to teach drawing in technical schools and artistic institutes. In 1915 he began teaching in the Michelangelo Buonarroti circle – unsurprising considering his history with life drawing, landscapes and architecture. His artistic practice took a break during the war and was to resume afterwards. In 1932 Mezzana devoted himself to the study of Leonardo da Vinci, Bernini and Giotto di Bondone. It was during this period that he would formulate an academic classicism in his style, taking influence from the artists he studied throughout his life.

Our upcoming May 1st stamp auction represents a chance to see (and purchase) a glimpse of Mezzana at his most spectacular. A truly unique collection of essays, proofs, designs and letters from the hand of Mezzana are available to purchase for the first time on the open market. From the collection of Major General Edgar Hume these examples have not publicly been seen since 1954, when they were exhibited at the Vatican Marian Year Philatelic Exhibition. A remarkable collection, which can viewed in full in our online catalogue here 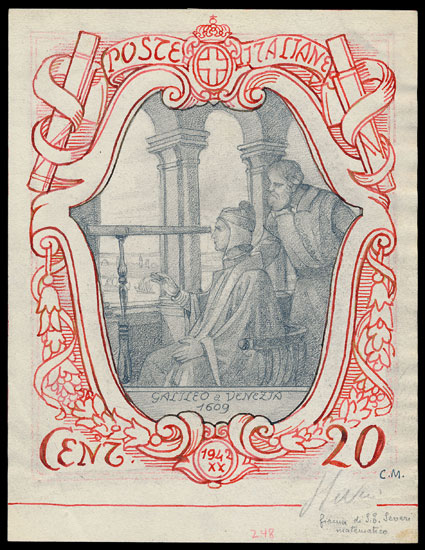 Perhaps the most interesting items available are the preparatory drawings, of which there are many. As a methodical artist Mezzana always made numerous studies for his stamp designs often using pencil on tracing paper so that designs could be layered on top of each other and built upon with ease. This can be seen beautifully in Lot 456, a volume of pencil and ink essays that document the development of the 1938 Proclamation of Empire set. This incredible lot contains essays of similar subjects and large sketches for the finalised version of all ten values in the set. The research sketches in this volume are fascinating, with an amazing level of detail going into each individual design. The preliminary drawings and research for the 10c issue in the set show the process in its full intricacy. Mezzana begins with his protagonist, a single male figure pushing a cart – to achieve this figure he has set out a number of initial sketches. He has used a life model and trialed different postures until he was happy with the final form – similar to Leonardo da Vinci’s drawing process. 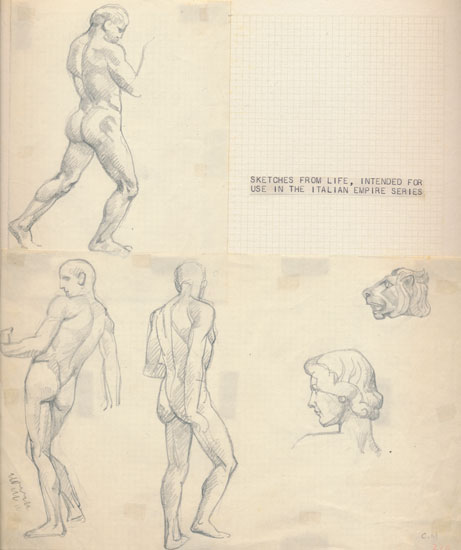 It was the standard for Renaissance artists such as Leonardo and Michelangelo to place great emphasis on the human form and it is no shock that an artist inspired by the classics would do so as well. Once happy with the figure Mezzana reproduces the same image with more detail, he slightly changes the positioning of the body, adds clothing, uses detailed shading to highlight muscles and pencils in the facial features. It is at this moment that he has set out the final design for the central motif of this stamp. 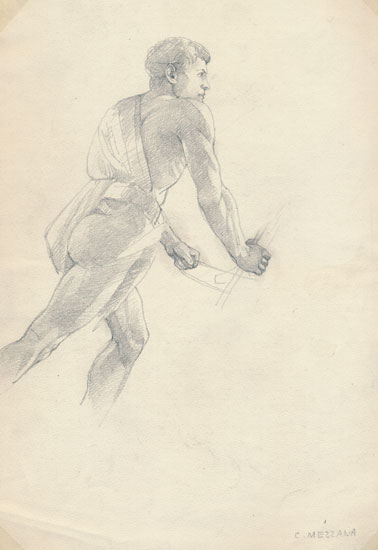 From this sketch he is to add the remainder of the design, he transposes his completed man and adds the cart, relevant inscriptions, dates and multiple birds flying in the top right of the image. This is the final sketch and is presented in the volume above the finished stamp itself. At this point the design has transformed from a single life drawing to a scene in which fits the theme of the Proclamation of Empire. 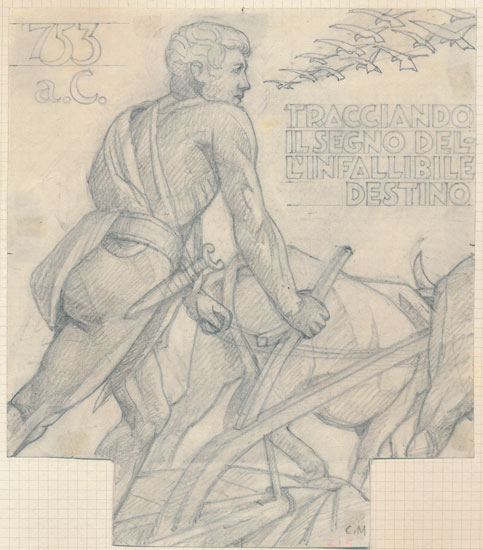 Finally Mezzana designs the border, this exists as a master framework which tidies up each design and maintains continuity between each value in the set. Despite this being the simplest element to the design, the same level of detail is applied and Mezzana produces preliminary shaded examples alongside a larger unshaded overall master sketch. Once again these drawings have been produced on tracing paper which allows for the designs to be layered on top of each other in advance of deciding the final image. The whole process is a combination of sketches that build in detail, each rendition more advanced than the previous, he touches upon the designs with pen and ink and later uses watercolour if colour is needed. It is a lengthy process and one that proves himself not only to be obsessive but also to be a craftsman, not happy until each design has been perfected. 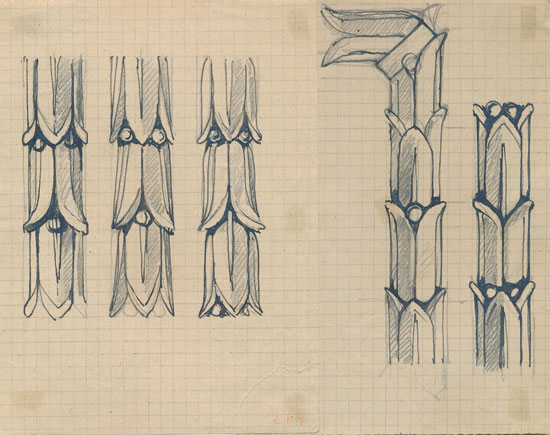 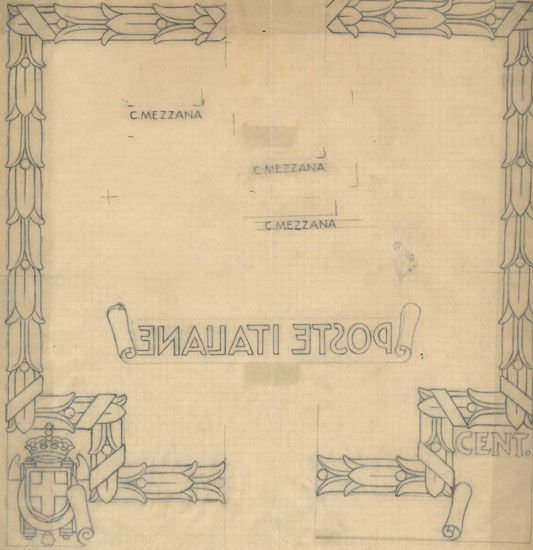 These drawings also represent a process of trial and error, Mezzana constantly tests ideas, scraps ideas, improves on ideas and finalises ideas. Whilst the collection contains many designs for stamps that did indeed come to fruition, it also contains unadopted and rejected designs as can be seen with Lot 455. This lot contains designs for the 1937 Augustus set and comprises of pencil essays on paper, eight accepted and unaccepted designs of Libya or General Colonies Augustus issues are included. This material presents a fascinating archive of the process of stamp design. The rejected designs demonstrate that there is some complexity in the construction of a stamp, with a dialogue between artist and government required in order to convey a particular image that both parties are happy with. Lot 455 even contains a letter from the ministry of Italian Africa which states the final designs for the colonial issues out of the examples Mezzana had presented. Portraying specific imagery, particularly within colonial contexts, was important to the Italian government and this volume offers insight into the process from both the perspective of artist and the Italian authorities. Mezzana had to submit his designs prior to their induction, with some following a course of adjustment – a change of shade for example – and others being left on the drawing board, never to see the inside of a post box. 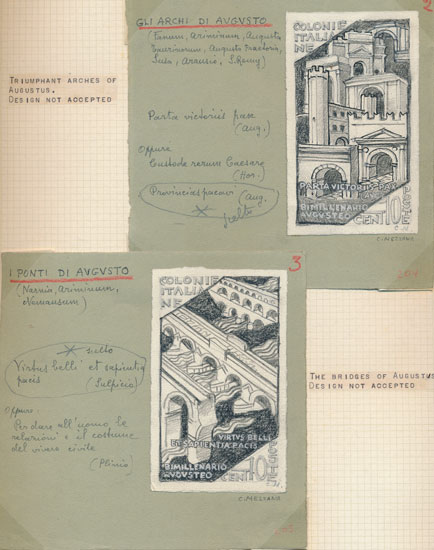 When viewing the designs of these stamps it is easy to make a connection between the classic artistic education Mezzana undertook and the designs he was producing for philatelic material. It could be assumed that the process of designing a stamp simply involves being given a theme or subject and placing this within the barriers of four perforated edges, and while in some ways this is true – it is not quite as simple as that. A theme or topic is likely ascribed to the artist, for example ‘The Centenary of Leonardo da Vinci’ and said artist must then produce a design that includes relevant imagery to suit the topic. However it is the selection and placement of this imagery that makes the stamp successful, the iconography. This is a tendency which has existed within Italian art for centuries, with the renaissance masters utilising religious iconography in their works to provide subtle hints at topics or to make the subject matter clear. The correct use of iconography is also vital for the success of a stamps design and Mezzana is an expert at this compositional art. The Da Vinci design in Lot 456 is a good example, whilst fundamentally all that is needed is an image of Da Vinci and an inscription marking the centenary, Mezzana has instead included the da Vinci portrait flanked by images of the Vitruvian Man, flying machine and the trebuchet – three of da Vinci’s most famous drawings. However, he includes these images without consuming, but instead complimenting the portrait image, managing to portray the man alongside what he is most remembered for with ease. His appreciation for the masters is seen in the loose copies of portraits and works by the greats tucked away amongst his notes and sketches and it should be expected that these would act as references in the production of his own works. 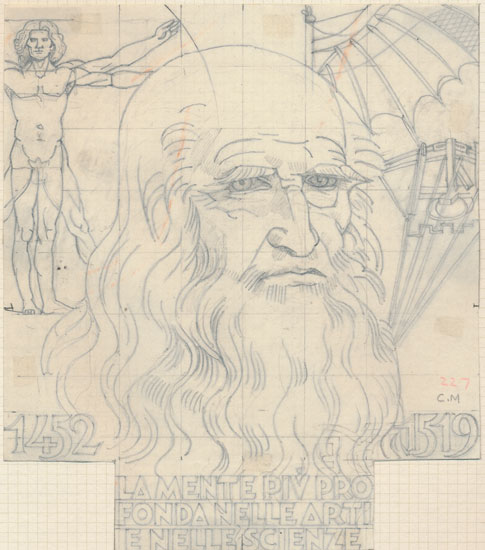 An obsessive genius like many of the great Italian artists, Mezzana’s meticulosity is to be viewed with awe and a collection like this is as remarkable as it is unique. It is unlikely a collection of this nature will be seen again and really is one not to be missed. If you are at all interested in any item in the collection (this article only briefly touches upon the examples), you can view the catalogue here and place bid via our website. If you would like to contact us regarding the collection please contact ian.hunter@warwickandwarwick.com.