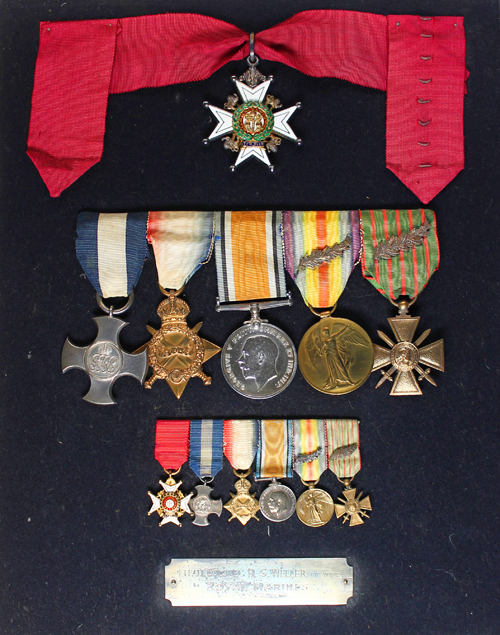 London Gazette entries for his various awards as follows:

2. 6th September 1916 DSC "In recognition of services with the Royal Naval Division in the Gallipoli Peninsula."

3. 21st May & 23rd July 1918 Promoted Brevet Lieut Col "Did valuable work in the training and preparation of material for the R.M. storming party. The Lieutenant Colonel and Second-in-Command of the party having been killed before landing, the command devolved on Major Weller, who directed the landing on the mole and the re-embarkation in a very gallant manner."

4-5. 23rd July 1918 CB and French Croix de Guerre in recognition of distinguished services during the operations against Zeebrugge on the night of 22nd-23rd April 1918.

The raid on Zeebrugge Harbour conducted on St George's Day included the landing of the 4th Royal Marine Bn (raised in secret just for this operation) on the mole direct from HMS Vindictive as a diversion and to engage and destroy the defences on the mole to allow the block ships to get into their position within the harbour. The purpose of the block ships was to stop the German U-Boats based in Bruges gaining access to the sea. The death of the CO and 2IC before the landing had been achieved meant that Weller became CO of the 4th Bn. The attacking force suffered over 200 casualties killed and many more wounded. The raiding force in total were awarded 8 VCs, 143 DSMs, 283 MIDs as well as other awards.

The 4th Royal Marine Battalion was collectively awarded the Victoria Cross, so a ballot was conducted to determine who the VC should be awarded to, after the Zeebrugge Raid. The ballot rules were not strictly adhered to and officers and mens votes were counted in the same ballot. Two VCs were awarded as a result of the ballot, to Sgt Finch with 91 votes and Capt Bamford with 64 votes. Major Weller was sixth overall in the ballot with 11 votes.

The full medal details are: