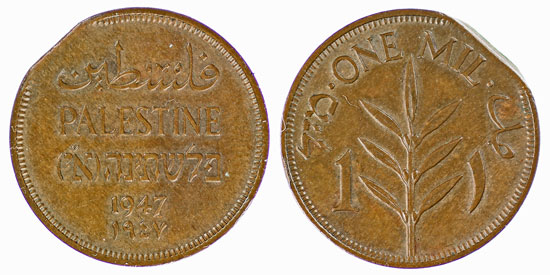 The entire 2,880,000 production run of the 1947 1 mil was ordered to be melted down at the end of the British mandate over Palestine by the Palestinian Currency Board. According to Krause only 5 other examples are known to exist making this coin an extremely rare find!

The coin was sent to the Royal Mint Museum Services for authentication and a copy of their letter of findings is included with the lot. After extensive analysis, they state, ‘…we have no reason to doubt its authenticity’.

The coin has what appears to be an edge knock at 10 o’clock which the Royal Mint states could possibly be a result of a blanking error at the time of production and would explain the distinctive notch visible on the edge of the piece.

Our full 19th June 2019 auction catalogue will be available to view on our website, which also has details on how you can place bids. Our Twitter and Facebook accounts also include updates of all our latest auction news.