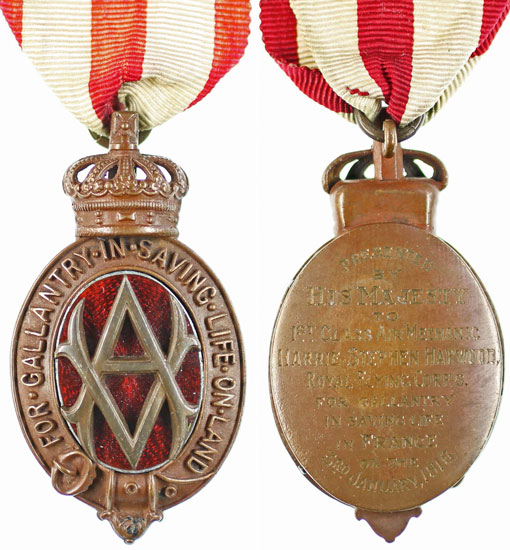 Harrie Stephen Harwood was born in Malton on 10th July 1884, he was educated at Worcester Grammar School, and after he left school he worked in the Audit Office of the North Staffordshire Railway Company.

He enlisted in the RFC aged 30 on 19th May 1915 with his trade listed as Motor Cyclist. He landed in France on 5th September 1915, and the award Albert Medal (Bronze) was announced in the London Gazette dated 19th May 1916 in conjunction with 2 other recipients:

“On the 3rd January, 1916, at about 3pm, a fire broke out inside a large bomb store belonging to the Royal Flying Corps, which contained nearly 2,000 high explosive bombs, some of which had very large charges, and a number of incendiary bombs which were burning freely. Major Newall at once took all necessary precautions, and then, assisted by Air Mechanic Simms, poured water into the shed through a hole made by the flames. He sent for the key to the store, and with Corporal Hearne, Harwood and Simms entered the building and succeeded in putting out the flames. The wooden cases containing the bombs were burnt, and some of them were charred to a cinder.”

He later served as an Observer on Probation in France from October 1916 to February 1917 and passed all tests and he returned to the UK on 7th March 1917, prior to being commissioned on 23rd May 1917 for service as aircrew. He was injured in an aero accident at Norwich on 19th October 1917, served some time at the Turnberry School of Aerial Gunnery, promoted Lieutenant on 24th November 1918 and served with 141 Sqn before being transferred to the Unemployed List 31st October 1919.

During WW2 he was appointed Pilot Officer on probation in Admin & General Duties Branch on 18th June 1940, promoted Flying Officer 18th June 1941 and Flight Lieutenant on 1st January 1943. He relinquished his commission on 10th February 1954 and died in 1975.

There was only 1 gold and 10 bronze Albert Medals awarded to the RFC in WW1.