In April 1945 as Allied troops liberated large parts of France, an area in northern France in the Guerandaise peninsula was still occupied by German creating local postage problems in the ‘pocket’ of St. Nazaire cut off from the rest of Vichy France. With dwindling supplies of stamps and no way of communicating with the PTT, the St. Nazaire Chamber of Commerce made the decision to commission a local issue of stamps until normal supplies could be resumed. 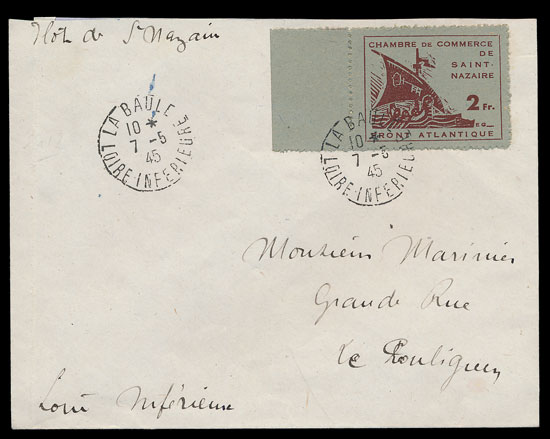 The vignettes showed a caravel at sea and were printed in 2 values, a provisional 2Fr letter rate stamp in chestnut and a 50c make-up value in dark green, both were printed on pale green paper. The stamps were printed between April the 9th and April the 13th when the matrix was deliberately damaged so no further printings could be made, the stamps were on sale until the 9th of May 1945. 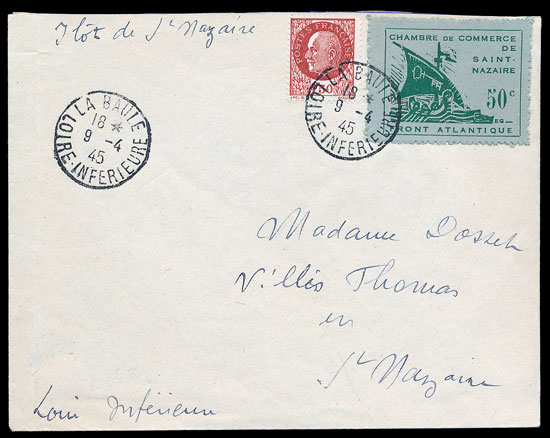 Our March stamp auction includes 2 covers, with examples of each issue, the 50c stamp is paired with a 50c Petain standard issue, both covers were posted at La Baule. The St Nazaire issues are rarely seen and particularly on cover so there will no doubt be considerable interest of these historical issues.