As I was walking to the train station last night, I saw a young lad clutching a Match Attack card, beaming and skipping down the road to tell one of his equally thrilled – if not a little jealous – friends. A mundane moment to the outside observer perhaps, but a poignant and rather thrilling one to someone who has just had the pleasure of handling its history in their hands. 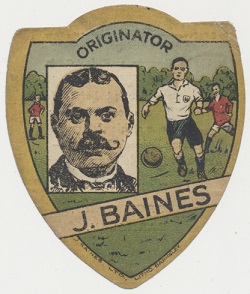 J. Baines - although not the ‘Inventor’ and ‘Originator’ of sporting trade cards that he claimed to be, with baseball cards being popular in America since the 1860s, his careful marketing and well-designed football cards certainly captivated the youth of Yorkshire and beyond. From his Dolls Hospital in Manningham, and various other locations in Leeds, Baines went on to produce hundreds of thousands of cards, in various die-cut designs, and with association footballs popularity growing, most bore the names of players and or popular teams.

Sensing this developing market, other savvy local proprietors such as J Briggs, W.N. Sharpe, and W,M. Toole all began producing and distributing football cards at around the same time, with some perhaps trading even before Baines. However, it was Baines cards that dominated the market for many reasons such as the competitions he offered alongside the excitement of trying to catch ‘em all! These competitions varied from essay writing to collecting certain ‘medal cards’ or the wax packets that the cards were sold in. The most sought-after prizes for successfully completing these competitions were football jerseys, given away immediately to the lucky boy (or girl)!

Baines also had another method of advertising by rather uniquely, boarding a horse drawn carriage, with his trained monkey on his shoulder, travelling the streets of Yorkshire and selling his cards to passing children. Not a scene easily overlooked! 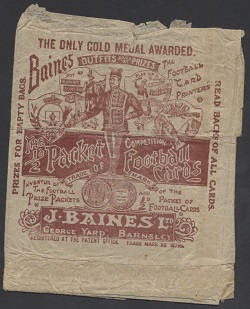 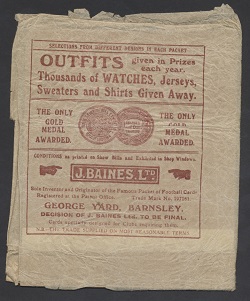 If essay writing wasn’t fun enough, children came up with other such games to play with their Baines cards, including a guessing game where one child would hold a card and the other would guess its design if they guessed correctly, the card was legally theirs. Skagging was another popular game of the day and if you do not know, is a game where children flick and throw their beloved cards at brick walls intentionally causing as much damage as possible. Due to cards being repeatedly ‘skagged’, and the earliest ones being made of rather flimsy paper, most surviving examples today are pretty sorry seeming, or poor, if we’re talking professionally, however the cards from Richard ‘Dick’ Littlewoods collection found in Warwick and Warwick’s 18th November sale are clean, attractive and surprisingly unskagged. 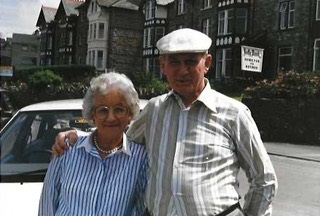 Dick Littlewood started collecting cigarette and trade cards as a schoolboy and his passion was fuelled not only by the excitement of swapping and discussing cards with his friends but by his fathers constant encouragement of his socially and academically instructive pastime. Unlike many collectors, Dick’s hobby continued into his adulthood and he was an active member of the Cartophilic Society writing many articles for them throughout the years.

Dick was a savvy collector, acquiring mainly rare and good quality cards. That being said, his collection was vast and varied with collections from many different manufacturers. However, his true passion was always for J. Baines and his football card empire. Dick was a knowledgeable and well regarded figure both in regards to Baines cards and within the Cartophilic Society. His astonishing collection of well cared for cards bears witness to this and Warwick and Warwick are honoured to be handling its sale. 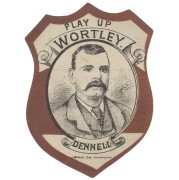 Some highlights from this sale include lot 13, a collection of 18 shield type cards. Such cards often bearing portraits of players or crests of teams and are commonly understood to be the earliest design produced by Baines in the late 1880s. 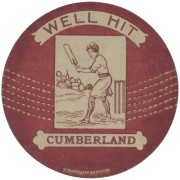 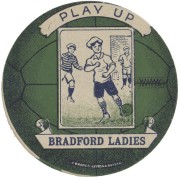 In the early 1900s the ‘Ball’ type designs were introduced with cricket, football, golf and rugby balls, examples of which can be seen in lots 1, 16, 32 and 53 respectively. Cards typically bear a team or athletes name with a cartoonish sketch of the sport being performed in the centre. Interestingly, women’s football teams and female golfers and cricketers are featured more often than one might think, with ‘Bradford Ladies’, an example from lot 16 featured above. 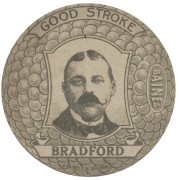 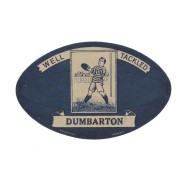 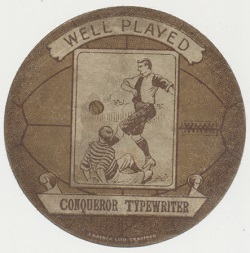 The Richard ‘Dick’ Littlewood collection will form the opening part of Warwick and Warwick’s Toys, Postcards and Cigarette Card held 16th November commencing at 10:00am live on EasyLive. To view the entire catalogue including Richard Littlewood’s collection of Baines and other cigarette cards, please click here.

We look forward to (virtually) seeing you there and in the meantime wish you a very happy browsing and bidding!

If you've been asking yourself 'how much are my cigarette cards worth?' why not contact one of our friendly cigarette and trade card experts for help with a free valuation!