"Wish you were here" message from the Titanic

A postcard mailed from the doomed liner “Titanic” is for auction in the Warwick and Warwick postcard auction of July 18. The lot description is as follows. 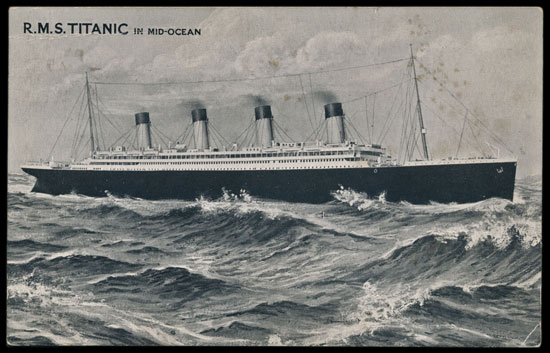 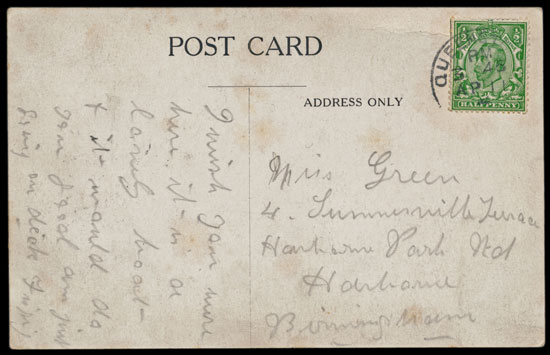 “Titanic” printed card, with trivial crease top left, written and posted on board the “Titanic”, addressed to Miss Green of Birmingham, with the message, in pencil, “I wish you were here, it is a lovely boat & it would do you good. Am just going on deck.” The card is signed “Fisgig”, the nickname used by the sender, Sarah Daniels, who survived the disaster. The card bares the circular datestamp of April 11 1912, of Queenstown (now Cobh), Ireland, the port from which mail written on board was posted.

Sarah Daniels was born in London on November 10 1875 and was employed as a maid to the wealthy Allison family of Montreal, Canada. She travelled on “Titanic” in 1st class with the family consisting of Hudson and Bessie Allison, their two infant children, Lorraine and Trevor and the children’s nurse, Alice Cleaver. Prior to boarding the “Titanic” Sarah had been staying in Birmingham with her friend, Nell Green. When the ship hit the iceberg Sarah decided that something was wrong and went out by herself to investigate. She was unable to convince Hudson Allison or Alice Cleaver to join her, or that there was any danger. On deck the crew directed her to lifeboat 8. She told the Manitoba Free Press “The boat I was in was not very crowded. There were only 4 men in the boat and they took the oars. There was no officer in the boat and a woman steered as we were rowing away in the darkness.” The Allison family perished with the exception of baby Trevor, who was saved by his nursemaid, Alice Cleaver.

The lot is offered together with 2 further postcards written from Sarah to Nell in 1906 and 1908, when she was also using the nickname Fisgig 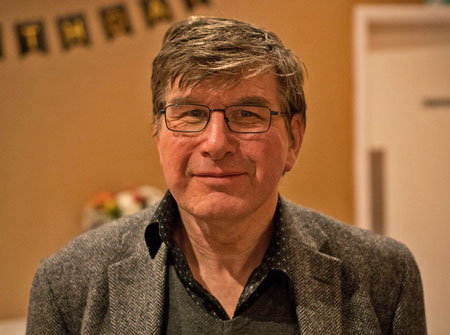 The vendors, brothers Ralph (John) and Stephen Wilkes are related to Nell Green and research notes and a genealogy is included in the lot. The estimate is £15,000 - £20,000.