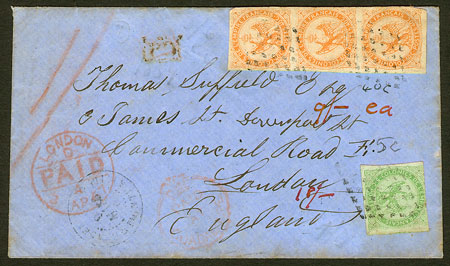 Guadeloupe is one of the Leeward Islands in the Caribbean. In February 2012 we auctioned 3 covers, all addressed to James Suffield of London and all sent in March / April 1867. Guadeloupe was originally discovered by Columbus for the Spanish throne, but the French colonised it in 1635 and it was annexed to France in 1674. During the next century and a half Guadeloupe was seized by the British on several occasions, because of its rich sugar plantations, but it finally became French at the Treaty of Vienna in 1815. A British postal agency functioned at a number of foreign ports in the mid 19th century and offered a packet service for foreign mail. In Guadeloupe such covers were handstamped with the rare crowned circle “PAID AT GUADELOUPE”. Two of these three covers were franked with French Colonial adhesives totalling 1f. 25c., representing the 1/- rate and the third was franked with a block of 3 20c. French Colony Eagles, representing the 4d rate.

The covers had remained unloved and neglected in a collection and at some time in their history the owner of the collection had written the catalogue value of the stamps next to them, sometimes in pencil and, regrettably, sometimes in red ink. I managed to clean up the covers with a soft rubber, but unfortunately there was nothing that could be done about the red ink. Nevertheless the covers were rare and I’m sure that the new owner who acquired them in our auction will cherish them.