Cornwall unseen by the Tourists By Colin Such

I always feel sorry for collectors of Cornwall cards because of the enormous number of postcards produced for the tourist market and sold in vast quantities. Such cards mainly feature coastal scenes. Dealers’ boxes and internet site listings are full of them. It must take a lot of patience on the part of the collector to look through a vast number of common views in order to find something unusual for his or her collection. There were in fact a small number of local publishers of real photographic social history cards in west Cornwall and although their work is difficult to find, the cards they produced were often highly detailed and are currently well collected.

One of the most prolific of these local publishers was Ted Bragg (1877 – 1928). He was born in Ulverston, Cumbria and started his working life in Blackburn, in Lancashire. He moved to Cornwall around 1900, possibly because his wife had family in the area. He soon established a photography business, called E.A. Bragg, in Illogan, near Redruth and later moved to Falmouth. He was hard working and apparently successful, using a glass plate camera to record local events. One of his cards depicted his son having his trousers mended whilst still wearing them. There is a note made by him that he sold 40,000 copies of this one card alone. This is a staggering statistic and may be the result of exaggeration. He enlisted for the First World War in 1915 and retired, possibly gassed, living on an army pension. Further research has been done by Phil Nicolls on the excellent websites www.roselandonline.co.uk and www.eabragg.co.uk.

All of the cards featured were auctioned by Warwick and Warwick on July 19 2017. 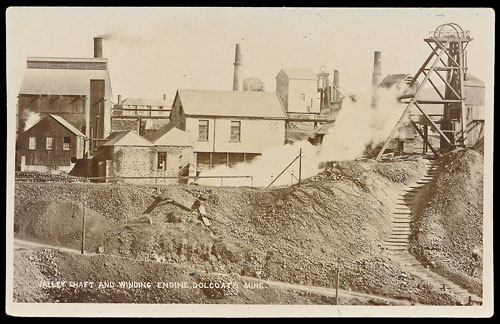 Dubbed “The Queen of Cornish Mines”, Dolcoath Mine at Camborne was originally a copper mine, when it started in the early 1700s. Later, tin became the most important ore mined until its closure in 1921. This card, by an anonymous publisher, has been annotated by the sender as showing the pumping engine in the foreground and the vertical winding engine and shaft in the background. This is my favourite card amongst those illustrated on these pages. Not only is it evocative of the great mining industry in Cornwall, it also reminds me of my previous employment as a mine geologist on a South African gold mine. 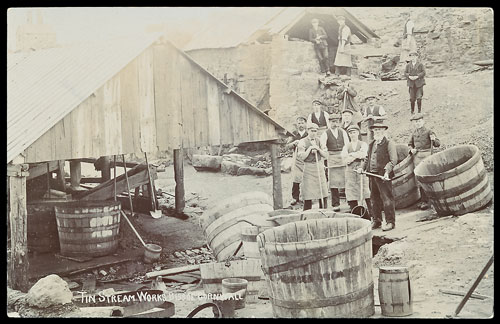 The publisher of this industrial card was S.J. Govier from the village of Chasewater near Redruth. It shows the tin streaming works at Bissoe. Tin was eroded from the primary mineral veins and re-deposited in alluvial gravels. Today this site at Bissoe is on a coast to coast cycling and walking route along the old mineral tramways. Panning for heavy minerals was a technique I used when employed in exploration geology in Australia. This is a rare industrial card. 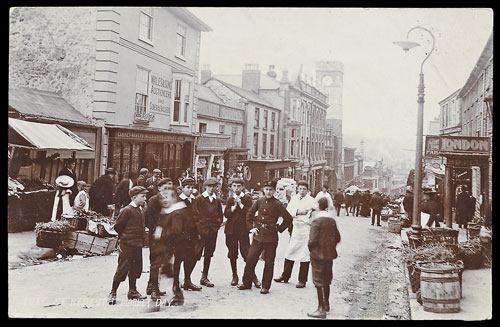 This card is typical of the wonderful social history cards produced by E.A. Bragg of Illogan, Redruth. It shows a group of boys in Fore Street, Redruth, on market day. 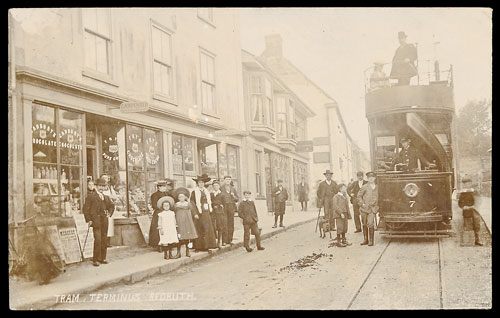 The tram terminus at Redruth is brought to life by the inclusion of onlookers in this detailed card by E.A. Bragg. It was posted in 1905, which must have been soon after the service was introduced, as the sender enquires “Have you been on this tram if not you must next time you come here.” 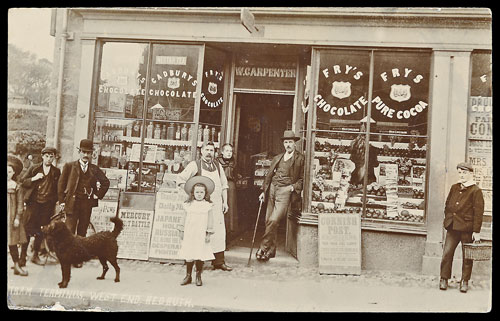 E.A.Bragg was also the publisher of this superbly detailed shop-front. It is the shop which appears on the left of the previous postcard. If you purchased the Cornish Post in this shop, you would be able to read about a ‘Camborne mother’s fall through drink’, whilst the Daily Mail featured the war between Japan and Russia, dating the card to the 1904-5 period. 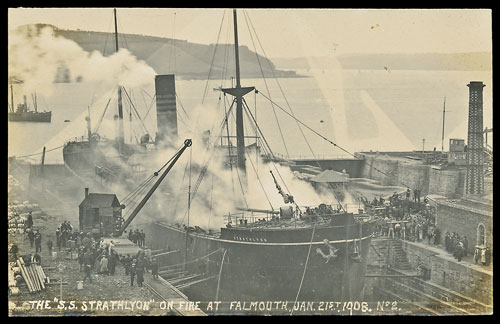 The Glasgow-built general cargo steamer “SS Strathlyon” was in dry dock at Falmouth in 1908 when an explosion occurred in the forward hold. The ship survived the fire and continued in service until she was bombed by the Germans in World War II. E.A. Bragg was on the scene to record the incident. 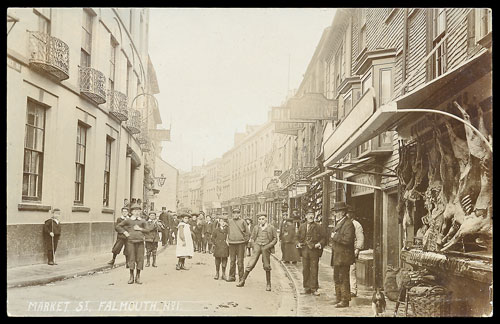 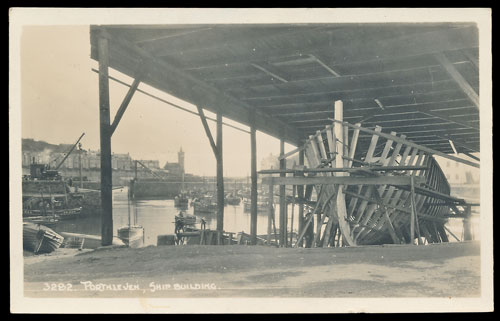 Small ship-building yards were a feature of many Cornish harbours. This yard is at Porthleven, near Helston. The card was published by A.H. Hawke of Helston and was mailed in 1936. 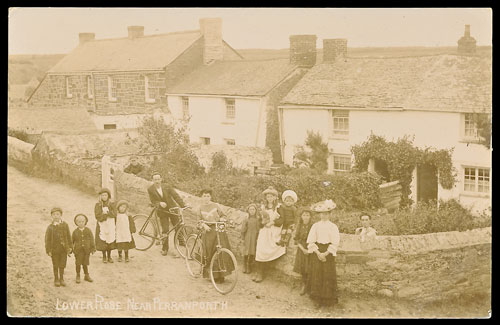 Rose is a small village near Perranporth, south of Newquay. This charming card by S.J. Govier of Chasewater must have been produced in very small numbers. 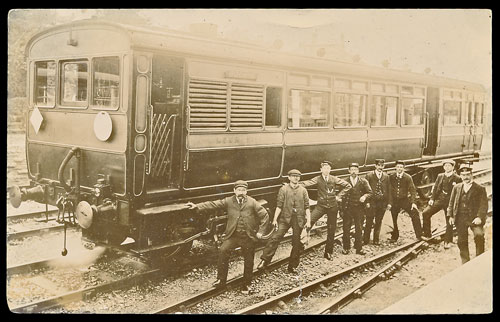 The old railway line from Wenfordbridge, through Bodmin and Wadebridge, to Padstow now forms the popular cycle and footpath, the Camel Trail (named after the River Camel). This railmotor is pictured at Wadebridge on a postcard used in 1909. The line was originally used to convey minerals to the port at Wadebridge and sea sand to improve agricultural land in the return direction. In later years it was used to export china clay. Passenger traffic ceased in 1967 and china clay traffic in 1978. 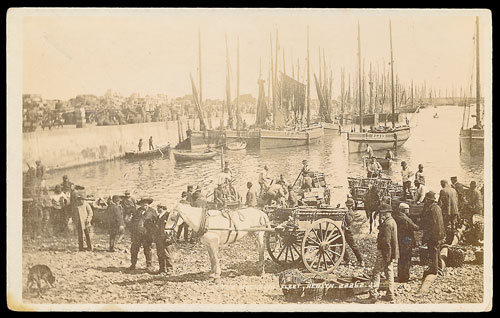 The fishing industry has always been important in Cornwall and Newlyn continues to be an important fishing port today. This card, by national publisher Valentines, depicts the mackerel fleet landing their catch. 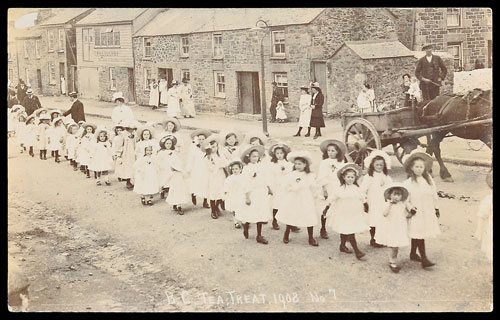 These little girls are taking part in a tea treat organised by the church at Lanner, near Redruth, in 1908. The premises of J. Willoughby, builder, contractor and undertaker are in the background. The publisher is unnamed. 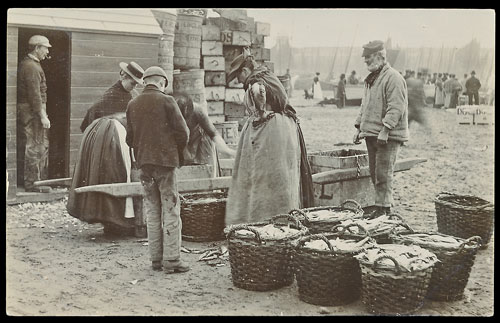 Postcards of St. Ives rarely show everyday life as well as this one does. Pilchards are being inspected and sold in the harbour. A superb social history document! The publisher remains anonymous. 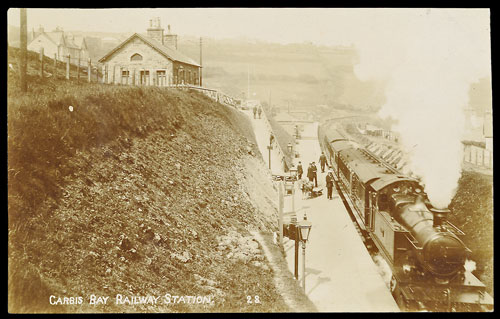 The single track branch line that connects St. Ives to the Penzance to London main line at St. Erth must be one of the most attractive in the country. It featured regularly in the introductory sequence to the BBC television series Great British Railway Journeys, presented by Michael Portillo. Here a steam train stops at the diminutive station at Carbis Bay. I have a copy of this card in my personal collection, as I am fortunate in having a holiday home only a few metres from the station. 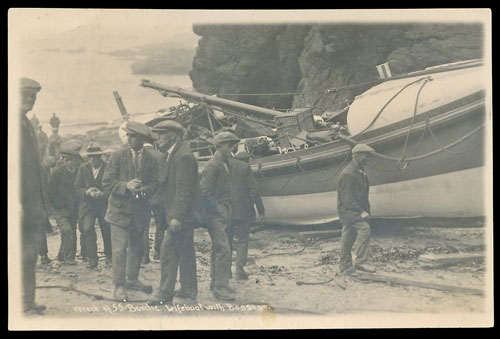 Shipwrecks are a common feature of the Cornish coastline. This card by A.H. Hawke shows the return of the Lizard lifeboat Frederick H. Pilley, in 1924, after rescuing 93 people from the White Star liner Bardic, which was aground on the Maenheere Reef. The liner was eventually towed to Falmouth. 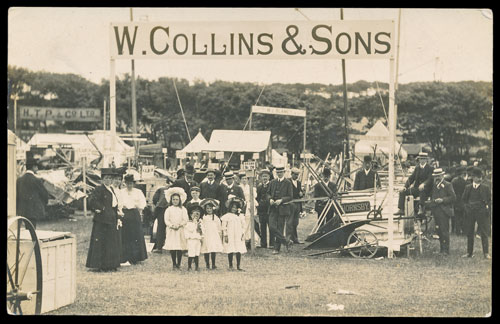 Helston was the venue for the Royal Cornwall Show in 1908. This detailed card by A.H. Hawke shows the stand of W. Collins and Sons, who were trading as seed, manure and implement agents. 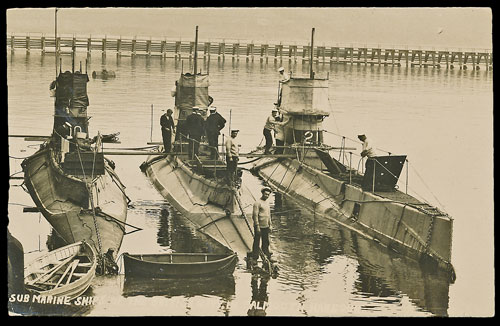 Three British Naval “sub marine ships” are shown in Falmouth harbour on this card which has no publisher details but probably dates to the period before the First World War. 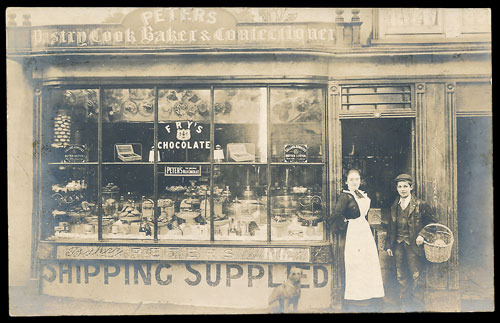 This Falmouth baker’s and confectioner’s clearly considered that provisioning ships was an important part of their business, as can be seen from the sign-writing below the shop window.