There has been a long history of conflict between Muslims and Christians in many parts of Europe, Asia and Africa. There is one area of such conflict which came to my attention recently whilst researching the background to a soldier’s letter. This area was the large island of Crete, which is now part of Greece and an island well-known to holiday makers. The 19th century saw almost continuous hostilities between the Christian rebels, supported by Greece and the Muslim minority supported by the Ottoman EmpireinTurkey. In 1896 Greece sent armed soldiers of fortune to Crete to support a new mutiny, which resulted in an armed invasion by Greek soldiers in 1897 who proclaimed a union with Greece. The major European governments of Great Britain, Italy, France and Russia sent a naval blockade to Crete in order to prevent escalation of the conflict. An international peacekeeping force landed and took control of the situation. The small Cretan militia was placed under the control of British forces and it is in this operation that my soldier’s letter has its origins. The peacekeeping operation only lasted from 1897 to 1898 and by 1913 Crete had become part of the Kingdom of Greece.

Postal arrangements for the British forces were under the command of Major Fairholme, Assistant Military Commissioner. In most theatres of war soldiers’ letters were conveyed free of charge, as long as they were endorsed by a commanding officer. However in Crete the arrangements were different. Major Fairholme, in a circular to the troops, stated that British soldiers’ letters were to be sent abroad using the Austrian Post Office in Candia and that all such letters should be franked with an Austrian 1 pi stamp, paying the Austrian Post Office fee. Counter-signature by the commanding officer, as was normally the case with soldiers’ letters, was unnecessary. 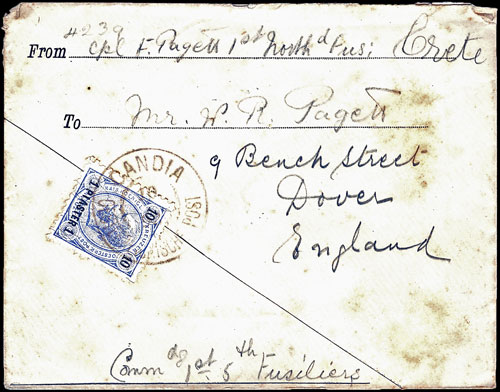 Correspondence from the peacekeeping European troops in Crete is quite scarce and some of it could well lie in collections, unrecognised for what it is. My particular example comes from a collection of Victorian covers which is part of a very general “old time” collection handed in for valuation and sale by auction. There is no doubt in my mind that the owner has no idea of the significance of the cover. It is a standard soldier’s printed envelope, specific for the purpose, endorsed from Corporal F. Pagett of the 1st Northumberland Fusiliers, addressed to Mr. W.R. Pagett (probably his father), in Dover, England. In the lower left triangle, the area where the commanding officer would normally endorse a soldier’s letter, is the inscription “Commdr. 1st 5th Fusiliers”, but there is no signature. Presumably this was written by Cpl. Pagett, only to find that a signature was not necessary. There is support for this theory: a similar cover, again from Cpl. Pagett formed part of the Gerald Sattin collection, which was auctioned in May 2004. On the Sattin cover, written a month later, Pagett has written in the endorsement triangle “British Forces Crete” and has not referred to endorsement by the C.O. My cover, similar to the Sattin cover, bears a 1pi on 10pi Austrian adhesive cancelled by the Candia Oesterreichischerpost c.d.s. Regrettably there is no letter inside describing the operations. That really would be the icing on the cake!