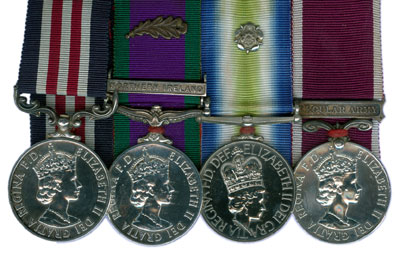 Brian Thomas Neck was born on 2nd October 1947. He enlisted in the Welsh Guards in Cardiff on 25th April 1966 and completed tours in Northern Ireland from 21st May 1971 to 26th July 1971, 14th November 1973 to 7th March 1974 and 20th October 1979 to 28th February 1980. CSgt Neck was Mentioned in Dispatches for his efforts during the last tour when the battalion was based at Bessbrook Mill in South Armagh and it was announced in the London Gazette dated 21st October 1980. The award of the Military Medal was announced in the London Gazette dated 8th October 1982 “On 8th June 1982, The Royal Fleet Auxiliary Landing Ship SIR GALAHAD, had begun landing operations at Fitzroy Settlement on the Island of East Falkland. Embarked, preparing to land, was 1st Battalion Welsh Guards. With only minimal warning, the ship was attacked and severely damaged by bombs from several aircraft. Intense fire and smoke spread rapidly from the devastated deck areas. In the fire, confusion, and exploding ammunition many casualties were incurred. Disregarding the conditions and ignoring the order to abandon ship, Warrant Officer Neck immediately began to organise the evacuation of soldiers from among the wreckage, many times, disregarding his own safety, he rushed back through the smoke filled areas, flames and continuing explosions to assist the hurt and injured. His courageous example, encouragement and assistance to his colleagues undoubtedly saved many lives.” 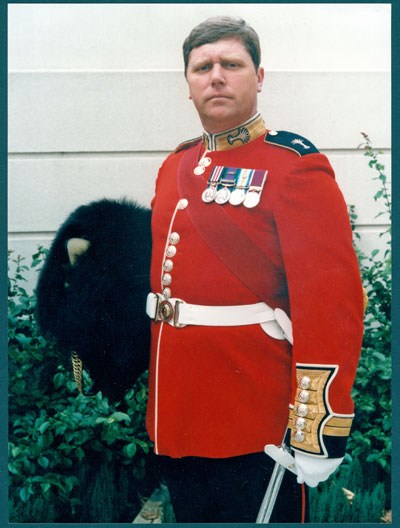 WO2 Neck’s Company Commander, Major Bremner’s recollection of the bombing and after was:

“I looked up through the open hatch of the tank deck just in time to see a cylindrical object fly through the air. There was a loud metallic clang. I had no idea what it was, but something made me shout ‘Take cover!’ My CSM took up the cry. A split second later there was a deafening explosion towards the stern of the ship, and immediately a second. A blinding, intensely hot flash roared through the tank deck. I was incredibly lucky; the CSM and I were beside a great pile of bergens which were just about to be lifted off when the bomb fell. We dived over to one side whilst the CQMS went to the other. He was a burns victim; the CSM and I got away with it. The lights went out and breathing became difficult. Miraculously, after what seemed like only a few seconds, they came back on. The thick, black, acrid smoke that now filled the tank deck dulled their effect but there was enough light to see with and I became aware of the full and sudden horror of what had happened. The sound was the first thing: the sound of horribly mutilated and frightened, disorientated men – a noise from a different world. Then the sights – unbelievable. The first thing I saw was a man running through a wall of flame from the far stern of the ship. He was on fire from head to foot, in excruciating pain and was begging his fellow Guardsmen to shoot him and put him out of his misery. Somehow he was smothered and the fire extinguished; morphine was torn off a dog-tag string and applied to give blessed, if only temporary relief. Then I saw a group of men standing stock-still. All with dark, burnt, curling hair, heads swollen like footballs, piercing but far-away eyes, bright red scorched faces, and all holding their hands in the air as if in surrender. All had been burned in the initial flash.

Then the 81mm mortar bombs, 66mm rounds, small arms ammunition and grenades in the tank deck started to cook off. Evacuation was now the priority. There was no panic. The CSM, Neck, bawled instructions and instinctively they were obeyed. He was doing everything as he did in barracks, making everything appear normal; he organized everything in a typical Footguards way. We found a way up and out of the tank deck; a queue was formed and men filed out. One man got half-way up a companionway when the CSM called him back, against the flow of traffic: ‘Did you fill in your ADAT Form?’ Yes Sir, he cried. Good. Now you see the bloody point of it. Go on, get a move on, you’re holding everyone up.’ It was a brilliant move that relieved the tension. 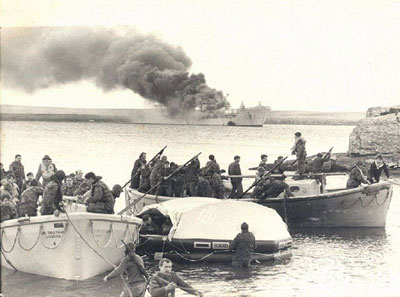