A Most Unusual Postcard 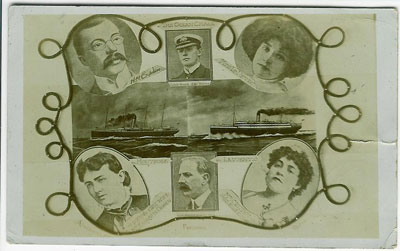 Dr. Crippen. The name itself is sufficient to send a shudder down the spine of any Englishman. Less well known is the fact that a postcard was issued, in montage format, commemorating his dramatic capture on board the SS Montrose, bound for New York.

Hawley Harvey Crippen was born in Michigan, U.S.A. in 1862. He studied medicine and dentistry in Michigan and London and returned to London in 1896, settling in Hilldrop Crescent, Holloway, in 1896, with Cora Turner, his second wife. Cora was an unsuccessful opera singer, with the stage name of Belle Elmore, and apparently made life intolerable for Hawley. He fell in love with his secretary, Ethel le Neve, and decided to murder his wife. After a party at their house, he poisoned Cora then dissected her body and burned the bones. He then buried the remains in the cellar.

Hawley and Ethel, using the unlikely disguise of father and son, Mr. and Master Robinson, boarded the SS Montrose, at Antwerp, hoping to make their getaway to the U.S.A. The captain of the ship, Capt. Kendall, had heard of the successful police search, for the remains of Cora, at the Hilldrop Crescent house and became suspicious. He used his newly invented radio-telegraph to contact Scotland Yard, who dispatched Chief Detective Inspector Dew, by a faster ship, the SS Laurentic, disguised as a pilot, to intercept the Montrose and arrest the pair. This was the first occasion on which the radio-telegraph had been used for police purposes.

The rare postcard is of the photo montage type, similar to the format made famous by Warner Gothard of Barnsley. It contains inset photos of Crippen, top left and Ethel top right, with Capt. Kendall between them. In the centre are illustrations of the two ships involved, the Montrose and the Laurentic, and on the bottom row are inset photos of Charlotte, Crippen’s first wife, Cora, his murdered second wife, with, between them, Chief Detective Inspector Dew. Publishers of the card are Abrahams & Co., of Portsea and it is postally used on Sept. 5th 1910 from Bantry in south-west Ireland, to Luton. The sender remarks "What do you think of this card for the latest out.”