Prior to the Rowland Hill reforms, the amount payable for the transmission of a letter by mail varied according to the distance, weight and the number of sheets.

On December 5th 1839, as an experiment, a flat rate of 4d. was introduced on all letters formerly charged at 4d. or more, regardless of distance. This uniform 4d. post lasted until January 9th 1840 and it was so successful that the Treasury decided it could reduce the uniform rate to 1d. for pre-paid items, weighing less than half an ounze. 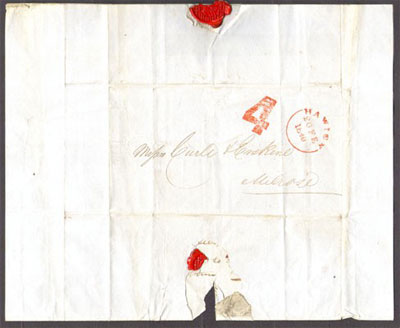 The period of use of the uniform 4d. post was thus fairly short and the majority of mail conveyed in this period received manuscript markings. However, certain towns were supplied with handstamps of the figure “4” and used these handstamps with red ink to indicate that the charge had been pre-paid and black ink when the charge had to be collected from the recipient.

These “4” handstamps are scarce and the Warwick and Warwick February 7th 2007 sale contained a particularly attractive example of the Hawick “4” in red, on an entire to Melrose.

What is puzzling about the cover is the fact that the circular date stamp, alongside the “4” handstamp indicates the date of February 26th 1840, 48 days after the introduction of the uniform 1d. post. There are several possible explanations:

Our preferred explanation is the last one, but we would be delighted to hear from anyone with further information and explanations. Please email colin.such@warwickandwarwick.com.

Further News on the Hawick 4

We are indebted to Gavin Littaur, who writes the following in the May 2007 issue ofGibbons Stamp Monthly.

As the fortunate purchaser of the above cover/entire letter, perhaps I could solve the apparent mystery. The writer has headed his letter “Hawick 26th February 1840” and there are two further manuscript dates, both for 25 February 1840, elsewhere on the entire. The letter from the British Linen Company Bank reads “…These two bills are enclosed…” and there are references to two further enclosures. As the cover weighs half an ounce, without the – now absent – enclosures, I submit that it is fair to conclude that the three enclosures raised the weight to between one and two ounces, thereby necessitating the use of this previously unrecorded red handstruck “4”.

Only a very few examples of the Hawick “4” in black (postage unpaid) have been recorded. This new discovery of the handstamp in red (postage paid), on a particularly sexy cover, with the clear Hawick c.d.s. in matching red adjacent to the handstamp on the obverse, is a postal history delight.