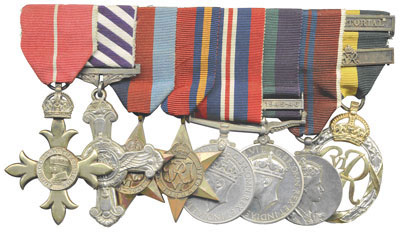 Jack Bertram Wales was born on 8th January 1917 in Ashton-under-Lyne. He attended Shaftesbury Grammar School and was a member of the School O.T.U. After school he trained as an engineer, but also joined the TA serving with the 9th Bn Manchester Regiment. In 1938 he joined the aircraft company A.V. Roe at Chadderton. He was commissioned Pilot Officer in the RAF from Lieutenant in the Manchester Regiment on 7th September 1940 and qualified for his pilot’s wings on 8th January 1941. He spent most of 1941 flying Lysanders with No 1 School of Army Co-operation and then No 4 Squadron. On 14th August 1941 while flying his Lysander on routine night flying, he was attacked and hit by a German JU88 night fighter near Clifton while on final approach to land. The aircraft suffered enough damage to put it out of action for a month, but Wales and his observer were thankfully unhurt. He was promoted Flight Lieutenant on 7th September 1941. 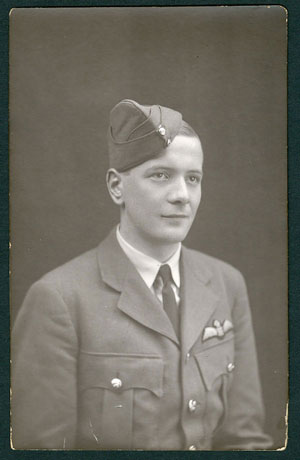 In March 1942 he joined 273 Squadron at RAF China Bay in Ceylon flying Fulmars. The majority of missions were sea recces in search of Japanese war ships. From 30th July to 4th August he was on board the carrier HMS Illustrious on operations in the Bay of Bengal. In August 1942 they converted to Hurricanes, and he was promoted Squadron Leader on 7th September 1942.

In May 1943 he joined 28 Squadron flying Hurricanes, mostly in the Imphal area. With a newspaper article detailing: “A British Army intelligence officer and an RAF fighter pilot recently guided three squadrons of B-25 medium bombers of the 10th USAAF to a civil target in N Burma. The target, a large concentration of Jap troops, guns and animal transport, was located in a skillfully hidden camp in the thick jungle of the Nankamu reserved forest to the E of the upper Chindwin. The US bomb-aimers relied upon their British guides, who were lying in the noses of two of the bombers to tell them when they were over the hidden target. We knew the exact location of the camp, the British IO told an observer. When we about 10 miles from the target, we saw smoke which must have been coming from the camp cookhouses. We dropped everything we had right in the area. It was one of the pleasantest sensations I’ve had for a long time to see tons of high explosive falling upon those Japs.” This raid was on 4th December 1943 and his logbook is completed with details and marked “Self in lead aircraft of 490th Bomber (M). 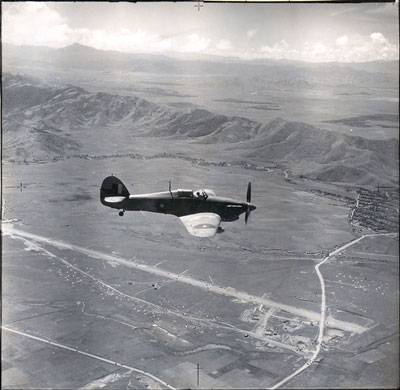 The award of the DFC was announced in the London Gazette dated 15th September 1944 for operations in Burma from 21st June to 15th November 1943 with 28 Sqn.

In February 1944 he moved to HQ 223 Group at Peshawar and then to 151 OTU in July. In May 1945 he joined 60 Squadron as CO flying Hurricanes and then Thunderbolts. He remained in the Far East until February 1946 flying operations against the rebel army in Surabaya and elsewhere in the Dutch East Indies. The logbook has photos of planes and pilots stuck in relevant places.

He returned to England and civilian life in April 1946. In 1947 he joined 613 Squadron AAF at Ringway flying mainly Spitfires and then Vampires and later became OC remaining with 613 until his death. In April 1949 he started flying as a test pilot for A,V. Roe and Co flying a wide range of AVRO aircraft including Lancasters, Shackletons, Vulcans, Meteors, Canberras etc. His 2 AVRO log books record over 1300 hours as a test pilot.

He died with 3 crew members when the Shackleton he was flying crashed near Foolow in Derbyshire on 7th December 1956. With printed eye witness statements regarding the crash which bear testimony to his effort to steer the plane away from the village before it crashed. A newspaper printed tribute from the managing director of A.V. Roe said “It is my good fortune to have known Jack Wales for many years not only as a pilot, but as a personal friend. He was a man who lived for flying and who was known and respected throughout the aircraft industry and the Service. In his ten years as test pilot with my company he had proved his outstanding abilities both as a pilot and leader of men, By his manner and modesty he had won the affection of all. When the war was ended, flying was in his blood, and in 1945 he joined 613 Aux Fighter Sqn at Ringway. By 1949 he had become Commanding Officer and at the same time became one of the few A.A.F. officers to receive the Territorial Decoration. He was an upright, forthright man with a keen sense of humour. He had a zest for life, and his presence was a tonic. His tragic loss at the early age of 39 has been a real blow to me, and to the company and his figure will be greatly missed by all who knew him in the world of aviation.” 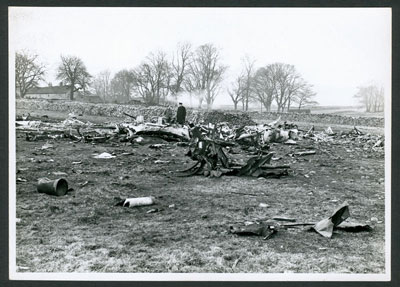