There is no doubt in my mind that the word ‘unique’ is one of the most inappropriately applied words in the English language.

The dictionary definition tells us that it refers to something of which there is only one. It cannot be qualified with degrees of ‘uniqueness’ and; either an item is unique or there is more than one of it.

In December 2014, here at Warwick & Warwick we were instructed to sell a stamp which may well be unique. Another similar stamp is unknown – or at least it remains unreported since it was issued in 1967.

The stamp in question is a commemorative Great Britain stamp issued in 1967 as part of the Discoveries and Inventions set (SG 752-5). It is the 1/9d value which commemorates the invention of television, missing the orange colour used for printing the Queen’s head.

This British Discovery and Invention Stamp is listed in the Gibbons Stamp Catalogue as SG 755b, but it remains unpriced. The lack of a quotation for this stamp is due to the fact that, until 2014, it had never been sold since it was discovered back in 1967.

The item is actually a vertical marginal pair, the upper stamp being normal and the lower stamp missing the orange. There is no paper fold to account for the missing colour and the assumption must be that the orange ink failed to print on the bottom row, or part of the bottom row of the sheet.

This, of course, means that initially there may have been as many as 20 stamps printed with the colour omitted. However, that was in 1967 - and to date the only stamp reported is the one which we auctioned in December 2014. It is most probably a unique stamp, which realised £23,600.

Having purchased the vertical pair from the Spotland Road Post Office in Rochdale, Lancashire, our vendor went back when he realised that one of the stamps had a major error but by that time the balance of the sheet had been sold.

Stamps with missing colours are very popular amongst serious collectors of modern British stamp errors and it’s certainly easy to see the attraction. The best of all, in my opinion, are those which omit the subject matter which is being commemorated.

One that has been sold in recent years is the GB 1963 Red Cross 3d value with the red cross missing. A UM corner marginal block of four was sold in a Swiss auction and realised close to £40,000. Only about 18 examples of this Red Cross Centenary stamp 1963 error are known, with one in the Royal Philatelic Collection. 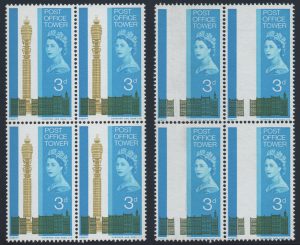 Another interesting and arresting error is the missing tower on the 3d value of the 1965 Post Office Tower stamp issue. Here, the olive-yellow missing colour leaves the stamp with a blank vertical panel where the tower should be. Around 30 mint and 15 used issues have been reported and one first day cover. The Royal collection has a vertical pair, one missing the tower.

Perhaps the best of these major errors is the missing red on the 1966 British Technology 6d value. This stamp should feature iconic British car designs of the 1960s, namely the E type Jaguar and three red Minis. A sheet was discovered in South East London with the red colour of the Minis omitted from three rows of six stamps. Subsequently, a few used examples have been discovered and it is possible that they came from other sheets. Again, the Royal collection has a mint example.

Another missing colour which I like is not in the same league as those quoted above, but nevertheless it is very appealing. The 1972 Silver Wedding 3p value is an elegant black and white portrait of the Queen and Duke of Edinburgh in profile on a dark blue background with silver inscription and denomination. The silver omitted variety removes the entire inscription and leaves the portraits in splendid isolation. About 120 are known. Again, one of these Silver Wedding Stamps (1972) is in the Royal collection and it begs the question whether the Queen enjoys imperfection on an issue commemorating her silver wedding.

Should you be in possession of a missing colour stamp and require a free valuation, please get in touch for expert advice and assistance.