One of the rarest paquebot cancellations seen on Hong Kong stamps emanates from the Russian East Asiatic Steamship Company. Around 1900, this company started a service between St. Petersburg, via the Suez Canal, to Vladivostock, calling at Hong Kong en route. From 1905 a double-lined oval cancellation was used to cancel mail posted on board its ships, including those covers bearing Hong Kong adhesives. At the bottom of the oval were 2 stars and a Cyrillic letter, which denoted the specific ship using the cancellation. Webb, in his book “The Philately and Postal History of Hong Kong and the Treaty Ports of China and Japan” reports seeing only one example of this cancellation. It was on a block of 4 King Edward VII 4c stamps and the ship’s letter was “de”. It was in the Barnfield and Antonia collections and last saw the light of day when the Antonia collection was auctioned, in 1981, realising 70,000 yen. 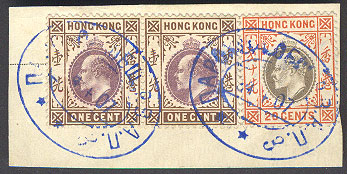 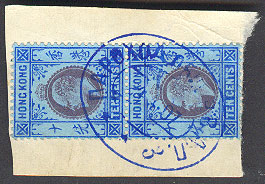 Warwick and Warwick are pleased to announce that we have discovered another version of this rare paquebot cancel. This time the ship’s letter is “ze” and the cancellation is recorded 4 times – twice on a piece bearing a KEVII 1c pair and 20c single, once on a piece bearing a 10c vertical pair and the 4th partial strike on a 10c stamp.