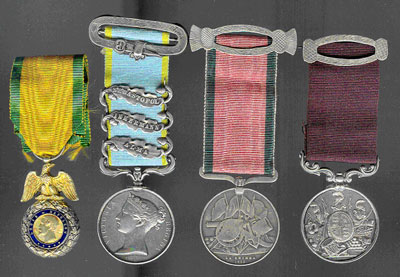 The Médaille Militaire (military medal) is a decoration of the French Republic which was first instituted in 1852. The creator of the médaille was the emperor Napoléon III, who may have taken his inspiration from a medal issued by his father, Louis Bonaparte, King of Holland. The Médaille Militaire was issued to any non-commissioned officer or enlisted personnel who distinguished himself by acts of bravery in action against an enemy force. Commissioned officers were not eligible. An interesting feature of the médaille is that it was also the supreme award for leadership, being awarded to generals and admirals who had been commanders-in-chief. This particular médaille is considered superior even to the grand cross of the Légion d'honneur.

The Médaille Militaire is one of the rarest French decorations to be bestowed upon foreigners, in contrast to such medals as the Croix de Guerre. Foreign bestowals of the médaille reached their maximum during the Second World War, mostly to members of the British Army as well as to the United States military. The decoration is considered, in both countries, to be the equivalent of a Meritorious Service Medal. 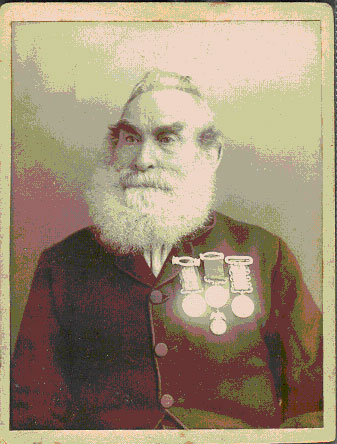 Photograph of Sargeant White, taken at a Grantham photographer’s studio, clearly showing him wearing the 4 medals.

Sergeant White was awarded the Crimea Medal with clasp for the Battle of Alma, fought on 20th September 1854, the clasp for the Battle of Inkermann, fought on 5th November 1854 and the clasp for the siege of Sebastopol, from 11th September 1854 to 9th September 1855. The Turkish Crimea Medal was supposed to have been issued to all recipients of the British Crimea Medal but a number were lost when the ship carrying them sunk in the Mediterranean Sea and there was a shortfall of some 35,000 from the almost 100,000 requested for the British forces. They were issued un-named but Sergeant White’s has been engraved with his details. The Queen Victoria Army Long Service & Good Conduct Medal has the dates 1859-60 impressed after his details. The 3 British medals have different decorated buckle fasteners, which can be clearly seen on the studio photograph, taken in Grantham, of the recipient wearing all 4 medals.

The group is presented together with copied confirmation of the France Medaille Militaire from “Medals of the British Army and How They Were Won” by Thomas Carter (1861). A rare group, to an unsung hero, who, from his photo, looks as though he lived to a good age.