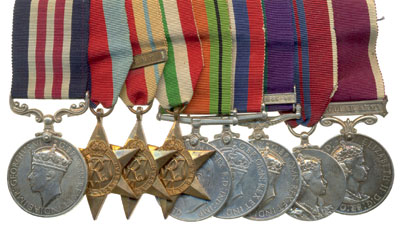 The award of the Military Medal was published in the London Gazette dated 15th June 1944.

With newspaper cutting, “For gallantry in action and continued devotion to duty in the Italian Campaign Company Sgt Major Edgar Slade, of the square Holsworthy was awarded the Military Medal. C.S.M. Slade is at a camp of the Royal Engineers, and he and his commanding officer spoke of the incidents that won him the award. “One of the outstanding occurrences that had earned him official recognition” said his commanding officer, “was the burning of an ammunition truck in C.S.M. Slade’s charge. Enemy action set the vehicle on fire, and in spite of the great danger from exploding ammunition, C.S.M. Slade managed to extinguish the blaze, saving truck and ammunition.” On another occasion, C.S.M. Slade went forward with a small party of picked men to mark out lanes through the minefields in preparation for the advance. Their job complete they returned to their own lines after a brisk skirmish with an enemy patrol they met in No-Mans land. At Anzio, where C.S.M. Slade was ashore soon after the assault troops, he was concerned in the digging of tunnels to forward observation posts, which were largely instrumental, later, in paving the way for the assault on Rome and breakout from Anzio. Enlisting in early 1938, Sjt Maj Slade is a regular soldier. He was unable to go to France with the B.E.F. – “Too young in those days” he explained – but came to North Africa in February 1943. Later he served in the assault on Pantellaria, and at Taranto, Cerignole, Anzio, Rome, Florence and in the Gothic Line.

Another newspaper article of the time records:

"Somewhere on the Anzio Beachhead there is a road sign post which always makes Devonshire lads out there think of home. It Reads: “Slade’s Stretch.” It is one of several sign posts of its kind. Not far away is “Parson’s Drain” and further on “Daniel’s Ditch.” They all pin-point the names of NCOs who helped to build the road. In the early days of the fighting in the beachhead, the only main route north apart from the Main Coast Road was the road to Albano. A Field Company R.E., were therefore ordered to build one capable of taking tanks over a ride through some woods. It was no easy task, for parts of the track were under water, and the area was under spasmodic shell and mortar fire. In the course of construction it became necessary to identify various sections of the route. Somebody suggested the names of some of the NCOs working on the road for this purpose. The bright idea caught on and the names are still there." 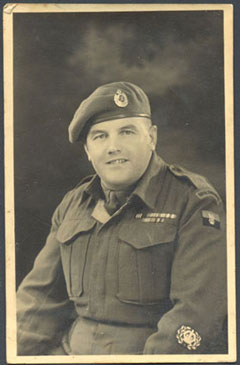 His military career continued after WWII and he was twice recommend for meritorious service. A letter from the OC 57 Fd Sqn RE dated 21st July 1954 states:

"I have the honour to bring to your notice the outstanding services rendered by the above named Warrant Officer during the period that the Regiment was engaged on Northern Command duties.

His initiative, zeal and efficiency were an inspiration to the troops under my command and I am convinced that his influence and exemplary conduct did much to make the camp the success it was.

I consider him to be worthy of meritorious recognition.”

"Again I wish to bring to notice the outstanding capabilities of the a/n Warrant Officer. During the Whitby Bridging operation in Nationally known appalling weather, his initiative, zeal, and leadership were an inspiration to all and the success of the entire operation being completed in time can be attributed to his efforts. I recommend again that he be again considered for meritorious recognition.”