I always find mail carried by ships interesting. In recent weeks I have had the opportunity of working on two collections of maritime mail, very different from each other.

Prior to 1851 the French Government ran a number of shipping services to various parts of the world, but following disappointing results decided to privatise them. Two famous shipping companies were created, the Messageries Maritimes and the Compangnie Generale Transatlantique, the latter serving the North Atlantic route and the former serving the Mediterranean and the rest of the world. The two companies were subsidised by the state and were required to carry on board a postal agent, who had control of the mails. These agents had considerable powers and could order the captain to give priority to the mails. 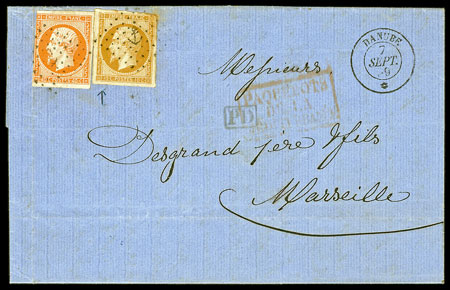 1859 entire from Constantinople to Marseille, franked with Napoleon 10c and 40c imperfs, tied by anchor in grid cancels, bearing the September 7th c.d.s. of the paquebot “Danube”, with framed “PAQUEBOTS / DE LA / MEDITERRANEE” and “PD” (paid to destination) alongside.

In the Mediterranean most of the mail conveyed would be that posted into boxes placed on the side of the ship at the port of call. A small percentage would be posted on board. Initially it was not necessary to pre-pay the postage and the agent would calculate the postage due on delivery. All mail would be handstamped with a circular date stamp bearing the name of the ship. However this practice ceased in 1866 and the ship name handstamps were replaced by handstamps indicating the route by means of a letter of the alphabet. No longer was it possible to determine on which ship the letter had travelled. The new handstamps were issued to the agents, who would often move from one ship to another. In total 72 different ships’ name handstamps were used, though 4 were duplicated because of mis-spellings. Covers are known where the stamps have been franked by the ship’s name c.d.s., but these are rare. Normally the stamps would be cancelled by the general anchor in a grid maritime cancel.

The second collection of maritime mail I have had the pleasure of working on recently was from the Solomon Islands, in the Pacific. The Solomons include many islands, stretching well over 900 miles in two roughly parallel lines, with most settlements located on the coast. From the end of World War II, inter-island postal communication was by a fleet of small boats, many owned by the Methodist Mission. The mails would be picked up whenever an opportunity arose. They would be handstamped on board with the boat’s unique handstamp, which varied in style from boat to boat, then cancelled on arrival at the nearest available post office. Covers in the collection I have seen date from the 1940s to the 1960s, but how much later the tradition continued I do not know. Certainly a lot of the covers are philatelically inspired, but nevertheless form an attractive collection, with many types of handstamp on offer from a restricted range of ketches, schooners and launches. 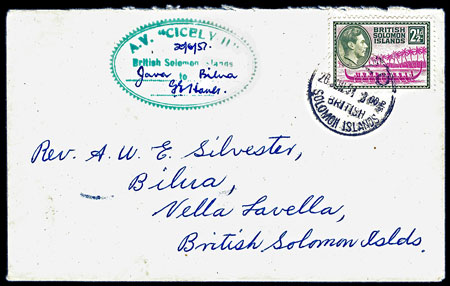 1957 cover addressed to Bilua on Vella Lavella island, with the auxiliary vessel “Cicely II” handstamp, the stamp bearing the c.d.s of Gizo. The “Cicely II” was a 40 foot cabin cruiser used by the Methodist Mission for medical and administrative work. 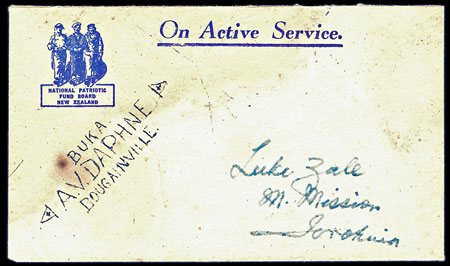 The auxiliary vessel “Daphne” was a vessel of only 10 tons operating between the 2 northern islands of Buka and Bougainville. This Active Service cover is unfranked and is addressed to the Methodist Mission at Torokina on Bougainville. 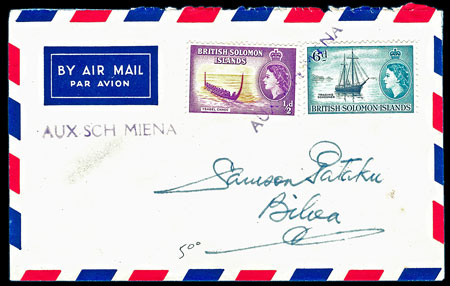 On this cover, addressed to Bihea, on Vella Lavella, the stamps are cancelled by the handstamp of the auxiliary schooner “Miena”, which is the vessel depicted on the 6d definitive. The “Miena” sank at her moorings in May 1962.