The Solomom Islands consist of a group of archipelago forming 2 parallel chains approximately 900 miles long. The capital is Honiara, which is located on the island of Guadalcanal.

A New Zealand Methodist Mission had been established at Barakoma, on the island of Vella Lavella, in the north of the group, and this location was used by the Americans to create an airfield, during the Second World War. All postal cancellers and other post office property were removed from the islands when the Japanese invasion was imminent. After the Japanese surrender and the establishment of a weekly aerial connection between Sydney and the Solomon islands, the post from outer islands would be handed to the pilot of the aeroplane and the mail would be cancelled at Honiara, the capital, on Guadalcanal. However, in September 1953, the missionaries were granted permission to frank and cancel their own mail at Barakoma, rather than send it to Honiara to be cancelled. In this way the residents of Vella Lavella would be able to answer correspondence by return mail.

I have seen a copy of the authorisation letter which states that initially only airmail letter cards were permitted and these had to be franked with stamps to the value of 8d. The cancellation of the stamps could be done “by writing the date across them, or by a datestamp”. The mail had to be inserted into in a sealed bag, suitably labelled to the Postmaster at Sydney, via Lae in New Guinea. In practise, a combination of the name Barakoma, the name or the initials of the clerk and the date was used by 6 different personnel of the mission. Sister W.B. Poole was the first to cancel stamps and her signature is found on covers from September 22nd 1953 to October 26th 1953. The next to cancel the stamps was the Rev. T Shepherd, a missionary at Biloa. Nurse Davinia J. Clark of the mission hospital was next and she usually signed her initials, though 12 covers exist with her complete signature. She was followed by Miss Myra C. Frazer, the school teacher. Very few covers are known. 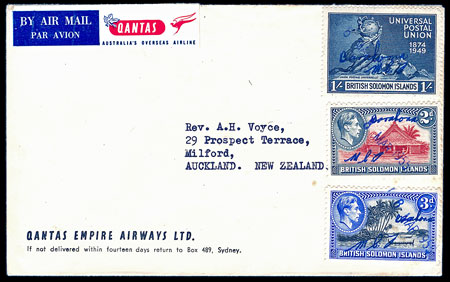 Qantas 1955 cover to Auckland, bearing KG VI adhesives cancelled in manuscript with “Barakoma” and the initials “M.C.F.” of Miss Myra Frazer, the school teacher and the datestamp “8 MAR 1955”. 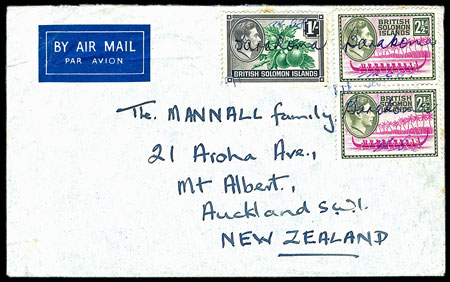 This January 11 1955 cover has been endorsed “M.C.F” by Miss Frazer, handstamped with the date and then further endorsed “Barakoma” by Nurse Clark, who must have considered that Miss Frazer’s cancellation method was insufficient. It is thought that this dual cancelled cover is unique.

The final person to sign the covers was Mrs. G. Shepherd, wife of the resident missionary.

Between September 12th 1955 and February 6th 1956 all mail despatched bore the datestamp across the stamps only, without any signatures On February 26th 1956 a straight line handstamp “BARAKOMA AIRFIELD” was introduced, which was used together with the datestamp. This handstamp was apparently the property of the Rev. Shepherd and he took it to Australia with him when he left the island on July 2nd 1957. 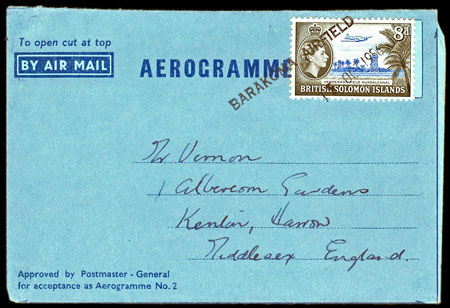 October 1956 aerogramme to England with the “BARAKOMA AIRFIELD” straight line cancel, which was the property of the Rev. Shepherd and which he removed on leaving the island in July 1957.

The Rev Shepherd had been informed that in future planes would call at Munda on New Georgia island rather than at Barakoma. The airfield at Munda was, however, not ready in time and planes continued to land at Barakoma. A temporary rubber handstamp “BARAKOMA AIRFIELD” was quickly and crudely made from a school rubber, in order to continue cancelling the mail. 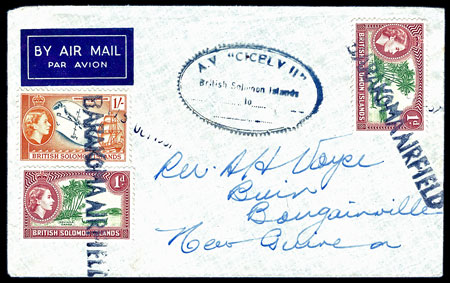 A temporary handstamp made from a school rubber was employed for a short time after the Rev. Shepherd had left with the straight line handstamp. This cover also bears the oval handstamp of the inter-island auxiliary vessel “Cicely II”.

When it was discovered that Barakoma Airfield was still in use, a new two-line handstamp was manufactured and sent to the mission for their use. This last Barakoma handstamp was only in use from February 25th to March 11th 1958. 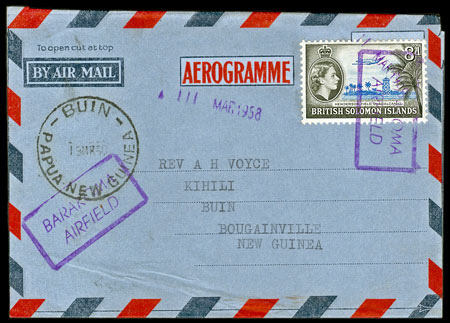 Between February 25th and March 11th 1958 Barakoma Airfield used a 2 line, framed rectangular handstamp. When the Qantas planes finally stopped calling at Barakoma, this rubber handstamp was handed to the District Officer at Gizo.

This colourful saga of manuscript cancels and local handstamps had come to an end after 4 years and 6 months, but it had provided the postal historian with a fascinating are of research.