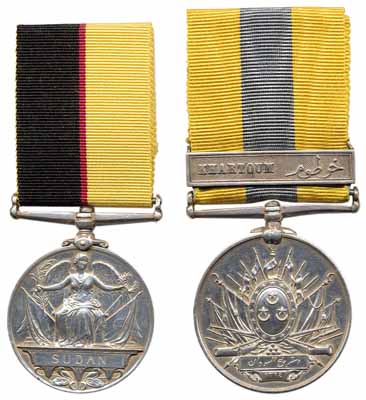 The most important medal group in the August 13th 2008 auction was an 1899 Queen’s Sudan Medal and Khedive’s Sudan Medal with Khartoum clasp, which were awarded to 3355 Pte. W. Akester, of the 21st Lancers. Pte. Akester was a confirmed charger with C squadron, at the Battle of Omdurman, on Sept 2nd 1898. What added to the attractiveness of the lot was the fact that it was supported by a large amount of documentation and photographs, including a document signed by R de Montmorency, who won the Victoria Cross at Omdurman. Estimated at £2,400, the lot eventually realised £5,750. 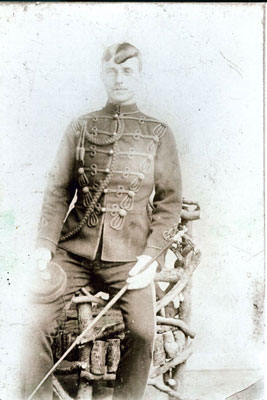 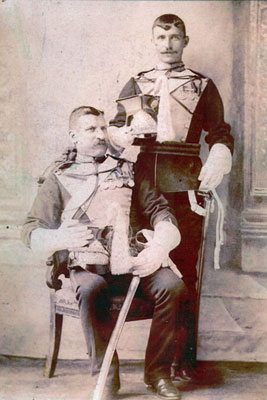 William Akester was born in 1873 and resident in Driffield, Yorkshire. He enlisted in the 21st Hussars (which became Lancers in 1897) aged 18 years and 3 months, on 10th October 1891, at Beverley, his trade listed as a tailor and his next of kin being his parents, William and Jane Akester, residing at Shady Lane, Driffield.

He joined the Regiment in Canterbury in 1891, moved to Secunderabad, India, arriving on 2nd October 1893 and received 1d Good Conduct Pay on 10th October 1893. He moved to Egypt, arriving on 22nd October 1896. The Regiment was re-designated as the 21st Lancers on 31st March 1897, which necessitated a good deal of re-training with the introduction of the lance as the principle weapon. He was granted 2d Good Conduct Pay on 10th October 1897, his Account Book being signed by R de Montmorency who won the Victoria Cross during the charge at the Battle of Omdurman.

The Anglo Egyptian armies had been fighting in the Sudan on and off from 1883 with various expeditions and campaigns. The campaign of 1898 was hoped to finally end the problem and B Sqn left Cairo on 31st July as the advance party for the regiment. Pte Akester by this time was serving with C Sqn which left on 6th August traveling by train, river steamer and on land, as they progressed south, arriving in the main camp near Omdurman on the 26th August. The 21st Lancers were the only British cavalry regiment present although there were 9 squadrons of Egyptian cavalry.

The Battle of Omdurman was fought on the 2nd September 1898 against the Dervish Army. After the first Dervish attack had been repulsed the 21st Lancers were sent out on reconnaissance. After reporting retreating troops mixed in with fresh Dervish forces new orders were issued to the 21st Lancers to harass the enemy where possible. Patrols reported an estimated force of 1000 blocking the road to Omdurman. The CO’s assessment that 440 lancers could reasonably be expected to clear some 1000 infantry on open ground was logical. What was unknown was that just behind the Dervish position was a khor or dry river watercourse which concealed an additional 1800 Dervish reinforcements.

The 21st Lancers wheeled into line and C Sqn, commanded by Captain Doyne, was on the left flank of the regiment. The charge was only across ground of about 300 yards, but as the Lancers got within 50-100 yards of the enemy the khor became visible and as they closed they could see it was packed with spear and swordsmen standing 12 deep on the flanks and possibly 20 deep in the centre. Committed to the gallop it was too late to avoid the Dervish trap. On first contact the advantage was with the cavalry delivering their attack, with speed and weight of horse and rider dealing a heavy blow, but once they were jumping into and over the khor, the advantage changed, with the enemy slashing at the horses unprotected bellies and legs bringing many down and unseating their riders. There are many tales of individual heroism and remarkable escapes. The survivors fought their way through and regrouped on the other side of the khor. The estimated duration of the action in the khor was 2-4 minutes, but this would have seemed a lifetime to many.

The enemy were finally driven from their positions by the regiment using long-range rifle fire. The Lancers then returned to collect their 21 dead. The enemy casualties have never been confirmed but estimates range from 30 to 100. The 21st Lancers received 3 Victoria Crosses for this action.