Postmasters’ Provisionals are the name given to stamps and postal markings issued as an emergency stopgap measure by postmasters in charge of the mail system, in places where the normal supply of postage stamps has ceased. Usually these emergency measures existed for a short period and consequently the provisionals are rare.

A postmaster’s provisional was necessary in the port of Batum, on the east coast of the Black Sea, now part of Georgia, on the occupation by British troops at the end of World War I. In 1918, immediately prior to the Turkish invasion of the area, the Russians had removed everything of value from the Batum post office, including the stamps. The occupying British Force oversaw the departure of the Turks and handed the running of the Batum post office to the Town Council. There being no communication means at that time and no stamps, the postmaster established a postal service and sanctioned a provisional handstamp until new stamps could be printed. On receipt of payment over the post office counter, a large double framed handstamp was applied to envelopes and postcards, indicating the fee paid and the official’s signature. A translation of the wording on the handstamp is:

Owing to absence of stock in Batum
Post-Telegraph Office, postage has been
paid and the money collected
Weight………………………
For Registration…………….
P.-T. Official………………..

Additionally a postal insurance intaglio handstamp was applied, with the number 1, which was probably a relic of the previous regime. The purpose of this was to create the impression that the letter had been franked.

In 1987 and 1988 the British Journal of Russian Philately listed 19 covers and cards bearing the Batum postmaster’s provisional and a further 8 had been recorded. It would appear that only one commercial usage had been recorded, on a cover to Glasgow.

The only other post office in the area to use the postmaster’s provisional was located nearby at Kobylety and only 2 covers have been recorded from here. 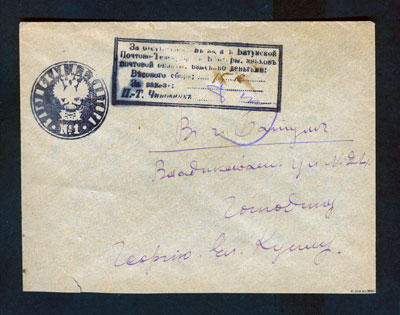 The above cover bearing the Batum postmaster’s provisional and postal insurance handstamp was sold in the Warwick and Warwick March 5th 2008 auction and realised £322, including the buyer's premium.