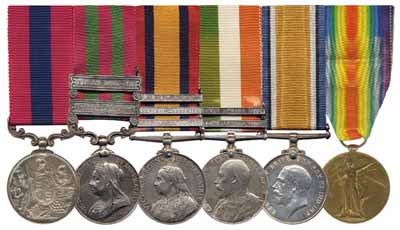 Albert Edward Young was born in 1875 in Stoke Bishop, near Bristol. He enlisted in the 1st Battalion Devonshire Regiment on 23rd January 1895, aged 19, 5 feet 8 inches tall, his former trade being a gardener.

He embarked for India on 11th September 1896 and arrived in Bombay on 2nd October. During operations on the Punjab Frontier the battalion was part of the 2nd Brigade of the Mohmand Field Force under Major General Elles and subsequently part of the First Brigade of the Tirah Field Force under Lieutenant General Lockhart. He embarked for South Africa on 21st September 1899 arriving in Durban on 5th October. The battalion was quickly moved to northern Natal due to Boer belligerence.

The battalion was involved in the early victory at the Battle of Elandslaagte on 21st October, for which he received the clasp on his QSA. They subsequently withdrew into the Ladysmith garrison that was besieged from 3rd November 1899 to 28th February 1900. He was promoted to Corporal on 7th December 1899. It was during the siege that the famous action at Wagon Hill took place on 6th January 1900.

The Boer attack of 6th January on the positions around Ladysmith commenced on Wagon Hill at about 0245. The Boers captured the front crest, but their attempt to take Wagon Hill itself failed. Reinforcements from the Gordon Highlanders and I.L.H. were sent to assist the 60th Rifles, I.L.H., and Sappers defending the hill. 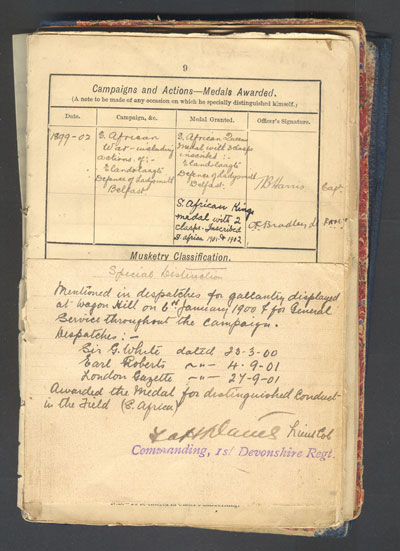 At 1300 the Boers, who had always hung on to their crest line, again attempted to rush Wagon Hill point. Sir George White ordered that the hill should be cleared of Boers at all costs before nightfall, and he sent the 5th Lancers and 19th Hussars to support the troops already at Wagon Hill. At about 1530 3 companies of Devons received orders to proceed to Wagon Hill as reinforcements, as help was urgently required. They arrived at Wagon Hill at 1645 to find that a party of 50 Boers were still in possession of the hill some 100 yards in front of the ridge held by the ILH, and directly in front of where the 3 companies were under cover. These 50 Boers had been holding on all day and inflicting great loss and all attempts to dislodge them had failed. Colonel Park was asked if he could turn them out by rushing them with the bayonet. He answered "We will try." After the three companies had been formed up in column with bayonets fixed and magazines charged, Colonel Park gave the order to advance at fifty paces interval in quick time, and when the top of the ridge was reached to charge the position occupied by the Boers. The charge took place in a blinding hail storm. On reaching the top of the hill they then charged 130 yards over open ground, under fire from three sides. The enemy waited until the charging lines were within 15 yards of them, and then ran down the slope and disappeared behind a ridge of rocks some forty yards away. Before the Devons could secure their position, they quickly came under fire again and several men were hit. Lieutenant Walker, Somerset Light Infantry, and about thirty-five men were hit during the charge. Colonel Park was then the only officer left, the three companies being commanded by non-commissioned officers. The position won was held until the Boers retired under cover of darkness. Half the survivors had their clothing shot through, and the majority of those killed were found to have been hit two or three times. The strength of the force was 5 officers and 184 non-commissioned officers and men, of whom 3 officers and 14 men were killed and 1 officer and 34 men were wounded. The following morning, Sir George White rode up and addressed them. Shaking Colonel Park by the hand he said: "I congratulate and thank you for the splendid work you and your men did yesterday. It was magnificently done. I am afraid you suffered very heavily, but you must remember that such work as that cannot be done for the Empire without loss.” 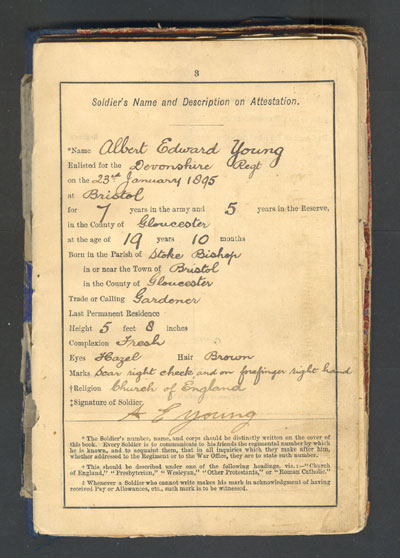 Corporal Young was mentioned in dispatches for gallantry displayed at Wagon Hill on 6th January and for General Service throughout the campaign, for which he was subsequently awarded the Distinguished Conduct Medal. The dispatches were Sir George White’s dated 23rd March 1900 and Earl Roberts’ dated 4th September 1901.

He left South Africa on 2nd February 1902, arriving back in India on 19th January. He was promoted to Sergeant on 19th September 1903.