In England several balloon flights were staged in the first decade of the twentieth century and the public were invited to send in postcards to be carried on these flights as a souvenir of the occasion. Such cards were forwarded to the addressees, after the flight, by normal post. It must be remembered that this was in the days of pioneer heavier than air aviation, before the Windsor to London trial airmail flights of 1911.

To celebrate the coronation of Edward VII, in August 1902, a balloon flight was organised at Beckenham in Kent. Three bundles of 100 postcards were flown and I believe only two have survived. Then, a month later, a balloon flight was planned to raise funds for the Lifeboat Service. The public were invited to purchase specially printed postcards depicting a hot air balloon bearing the banner Lifeboat Saturday. 4,000 such cards were sold for the flight from Manchester Botanical Gardens but it would seem only two have survived. One sold in auction in 1983 for £1,675. The flight had been a good fundraiser and it was decided to repeat the exercise a year later, on August 29th 1903. This time the printed card, which cost 3d., had a similar image of the balloon, but the landscape beneath was given a rather inappropriate Arctic feel to it. However at the take off the balloon was damaged and the flight had to be aborted. Not wishing to disappoint the large numbers who had purchased the souvenir flight cards, it was decided to try again and on September 5th the balloon took off successfully from Alexandra Palace, in north London and landed at Ongar in Essex, from where the postcards were forwarded to their addressees. 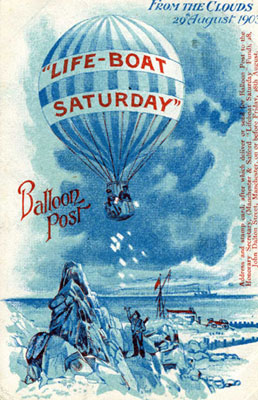 Our June 2010 auction contained not one of these rare cards, but two! They were despatched by a father to each of his two children and on them he indicates the sender’s address as Sky. On his daughter’s card he writes 'It is jolly cold up here' and on his son’s 'Am afraid we shall have rain. Very moist up here.' They both received the Ongar c.d.s. before being sent back to Manchester. They realised £920 each. 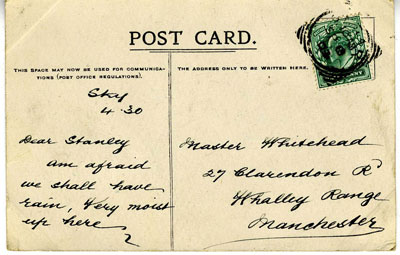 The Daily Graphic was a mass circulation newspaper in the Edwardian era and sponsored a 1907 balloon flight, as an advertising venture. They printed hundreds of miniature booklets about the flight, which the aviators planned to jettison en route as ballast, in the way that earlier balloon pilots had jettisoned sand to maintain the height of the balloon. The coal-gas filled balloon, named Mammoth, took off from Crystal Palace, London, at 5 pm on October 12th 1907, with a crew of 3 and 15,000 postcards and drifted for 20 hours and 30 minutes over the North Sea and Denmark, eventually crash landing near the village of Brackau, near Mellerud, in southern Sweden. The crew escaped unhurt but the balloon careered on for a further 30 miles, scattering its load of postcards over a considerable area. Some cards were found and forwarded to the addressees from Tosse, where the balloon eventually came to rest, but the majority were recovered over a period of several weeks by the Mellerud schoolmaster, Mr Mickow, who had played host to the aviators when they arrived at his door after the balloon’s crash landing.

Our August 2010 auction included a postcard from the Daily Graphic flight. On it Mr Mickow had written “... found near Mellerud, Sweden” and there was a Mellerud date stamp of November 2nd 1907 and London receipt stamps of November 5th on the reverse. Interestingly the card bore a G.B. 1d stamp, contrary to the instructions of the Daily Graphic which were that no stamps should be affixed to the cards, the addressee being responsible for the postage. Nevertheless it was charged 1½d. postage due. Unfortunately the card failed to find a buyer at auction because it was a little grubby and dog-eared. 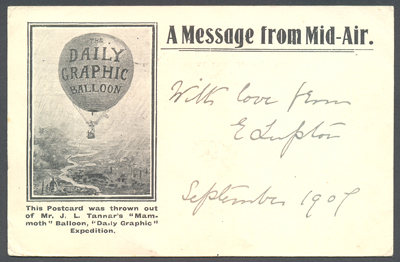 We offered another of these Daily Graphic cards in our auction on July 20th 2011 and this time the condition was better and the card realised £241 including the buyer’s premium.