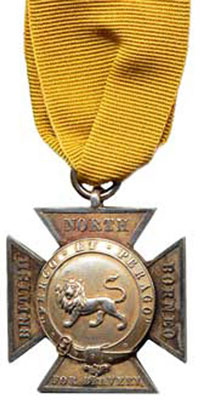 Five of these very rare Silver Crosses, and four in Bronze were issued to those serving in the North Borneo Armed Constabulary, for gallantry during a number of small police actions between 1884 and 1915. These involved the pursuit of bandits and rebels, largely via rivers meandering through mangrove swamps and the across jungle clad hills, in tropical rainstorms (with rainfall up to 200 inches a year, mostly in the afternoons) with ambushes and much sweat and toil by British Company officers, with Sikh and Malay (Sugat) police, Dyak guides and local Dusan and Kadazan porters.

An example of the circumstances resulting in these awards is given on Owen Rutters British North Borneo 1922, describing the attack on Mat Sallah's Ranau fort near Tambunan on 13th December 1897, during which Mr Jones and 4 Sikhs were killed and 9 wounded. "Throughout the action the Indian police behaved splendidly, even after the severe handling they had received, and were anxious to make a second attempt. During the action, Sergt. Natna Singh, although himself seriously wounded, succeeded after two attempts in picking up Mr Jones's body and carrying it back to a place of safety, after which he returned to the attack. For this gallant action in face of a point-blank fire he was given a commission and the Company's Cross for Valour".

They were made by Joseph Moore Ltd of Birmingham, and the hallmark is that for 1890.