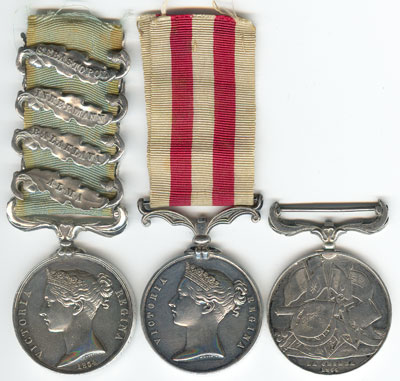 The famous charge of The Light Brigade took place during the Battle of Balaklava on the 25th October 1854. The lead up to the attack and who issued what orders to whom are a typical Victorian web of intrigue. The end result was that Lord Cardigan led some 670 cavalrymen of The Light Brigade along what became known as the “Valley of Death”. The valley was dominated on either side by the Fedyukhin and Causeway Heights. These heights were manned by some 20 Russian infantry battalions with over 50 artillery pieces, with further batteries in a redoubt at the end of the valley.

The 17th Lancers were on the left of the front rank of the charge with the 13th Light Dragoons on the right. The other regiments in the following ranks were the 4th Light Dragoons, 8th and 11th Hussars. They were exposed to a withering barrage of musket fire and cannon balls from 3 sides for over a mile as they charged down the valley. The charge succeeded in reaching the redoubt and driving the Russians from the position. However once the impetus of the charge was lost and heavily outnumbered, the survivors were forced to retire back down the same valley subject to a further hail of fire depleting their ranks even further. 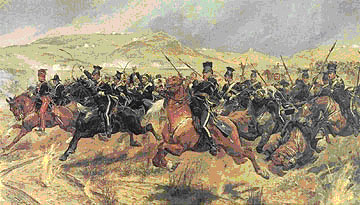 The total casualties were approximately 156 killed or missing and 122 wounded, with over 330 horses lost. It seems remarkable that the toll was not even higher considering the volume of fire that they faced. The 17th Lancers suffered the highest number of casualties with 24 killed and 37 wounded.

Pte Watson was 1 of only 4 men from the regiment along with Regimental Sergeant Major Charles Wooden, Sergeants John Shearingham and James Nunnerly to be awarded the French Medaille Militaire for the Crimean War, given with the citation “Alma, Balaklava and Inkermann, and were never absent from their duties.”

Lummis, Brighton and Sewell all confirm he rode in the charge. Roy Dutton in Forgotten Heroes states he enlisted in 1846 and died in Secunderabad on 21st January 1864, possibly from cholera. He also notes that a single Crimea Medal named to Watson was sold by Glendinning’s in 1923, 1928, 1935 and 1936 but never with the Indian Mutiny Medal.

Private Charles Watson's medals were offered in our December 2009 auction, on behalf of the family. They had never before been on the market and realised £11,500. The details of the group are as follows: 1854 Crimea Medal 4 clasps Alma, Balaklava, Inkermann, Sebastopol engraved in a running script style C. Watson 17th Lancers, 1855 Turkish Crimea Medal (Sardinia) un-named as issued, 1858 Indian Mutiny no clasp impressed Pte Chas Watson, 17th Lancers.