1860 China and Afghanistan Wars pair to Major General the Honourable Alexander Stewart, son of the 9th Earl of Galloway 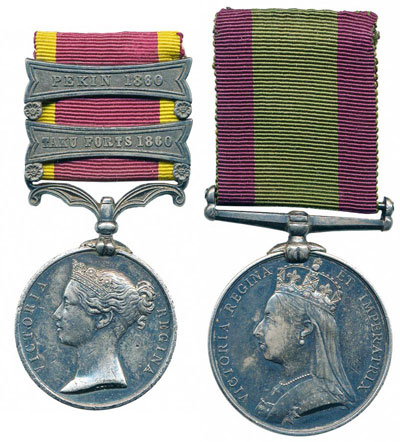 Alexander Stewart was born on 8th November 1838, the third son of the 9th Earl of Galloway Randolph Stewart and his wife Lady Harriet Blanche Somerset, the daughter of the 6th Duke of Beaufort. He purchased his commission of Lieutenant in the Royal Artillery on 21st June 1856.

In the Second China War (Opium War) he was present at Sinho, Tangku, actions near Tangchow and the surrender of Pekin in 1860 serving with Staff of the 2nd Brigade under Brigadier General Sutton. He obtained the rank of Captain on 6th July 1867 and Major on 22nd September 1875,

By 1879 he was serving with 1/C Battery Royal Horse Artillery in Afghanistan and was present at the Battle of Futtehabad on 2nd April 1879. A force of about 1000 British and Indian soldiers under Brigadier General Gough fought some 5000 Khugiani tribesmen. The only British artillery present were 4 RHA guns under the command of Major Stewart and were fully employed during the engagement bombarding the Khugiani in their fortified positions. By then disengaging and retiring the guns and their cavalry escort, it prompted the Khugiani to leave their defensive positions to pursue the apparently retreating British. This was Gough’s plan and as the Khugianis chased the mounted troops they rushed passed the hidden infantry who poured a withering fire into the Afghans exposed flank. British casualties were light, but the Khugianis were thought to have lost 300 plus killed and over 800 wounded. Lieutenant Walter Hamilton of the Guide’s Cavalry won the Victoria Cross during the battle for rescuing a dismounted trooper. Major Alexander Stewart was also present in the engagement at and on the Gara Heights near Kam Dakka on 22nd April 1879. He was mentioned in dispatches and granted Brevet Lieutenant Colonel in the London Gazette dated 21st November 1879 for his efforts in Afghanistan. 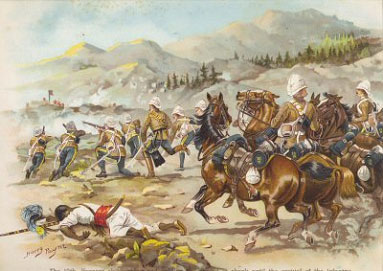 The title of Earl of Galloway was created in 1623 for Sir Alexander Stewart who was a favorite of James VI (James I of England). The Earl also holds the subsidiary titles of Lord Garlies (created 1607) and Baron Stewart of Garlies (1796). Major General the Honourable Alexander Stewart never became Earl and died before his two older brothers who became the 10th and 11th Earls in turn.