Many countries have issued bisects in the past. These are stamps which have been cut into two equal halves, usually by scissors, when a post office has run out of stamps of a certain denomination. A stamp of double the denomination would be selected for bisecting in order to facilitate the accounting. In some circumstances this was authorised by the postal administration and in others the local postmaster would act pragmatically without authorisation. In many cases philatelists would be aware of the practice and create a cover bearing a bisect, carefully franked by favour at the local post office. Such covers are called “philatelic” and have no great appeal to the serious collector. However I have just seen a 1904 cover bearing a Chinese bisect, which appears to be commercial.

In 1903, in Foochow, there was a shortage of 1c stamps and the postal administration authorised the bisection of the current 2c deep red. The bisected stamp was applied to the envelope by the post office staff, who also applied a handstamp “Postage / 1 Cent / Paid”, tying the bisect to the envelope. This combined bisect and handstamp was then franked by the normal Foochow bilingual c.d.s. 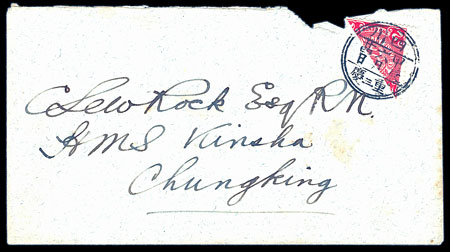 A similar shortage of 1c stamps happened in Chungking in August 1904. On this occasion the same 2c stamp was again bisected, with the authority of the postal administration, but this time without the additional handstamp. The cover I have seen bears an example of this Chungking bisect. The bisect is tied by a Chinese double circle c.d.s., the upper sector translating as Szechwan, the middle sector being the date in 1904, and the lower sector Chungking. The cover is catalogued at £2,500.

Further bisects appeared at Kweifu in February 1905 and Changsha in April 1906, the former on the 4c deep chestnut and the latter on the 2c deep red. However these were not authorised.

The cover is addressed “Lew Rock Esq RN, HMS Kinsha, Chungking” and other covers in the collection are addressed to members of the same family, suggesting commercial usage. “HMS Kinsha” was formerly called “SS Pioneer” and was a 616 ton paddle steamer, 180 feet long, built at Dumbarton, shipped to China in pieces and re-assembled at Shanghai in 1900. She was owned by Archibald Little, a British trader, who wanted to start a passenger and cargo service between Ichang and Chungking on the upper Yangtse River, through the gorges and notorious rapids. The ship only made one journey before being commandeered by the British Navy to evacuate British refugees, as a result of the Boxer Uprising in 1900. She was purchased by the British government, converted to a gunboat, renamed “HMS Kinsha” and became the flagship of the British Yangtse Fleet for the next 20 years. 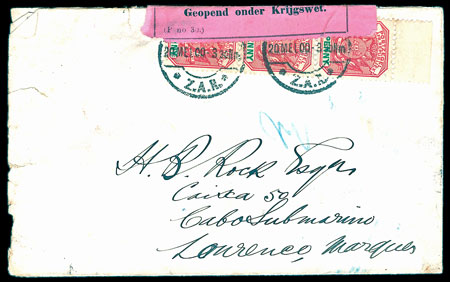 1900 censored cover to H.B. Rock, in Lourenco Marques, from Transvaal.

A further cover in the correspondence is a 1900 censored cover from Transvaal to Mozambique, addressed to “H.B. Rock Esq, Caixa 50, Cabo Submarino, Lourenco Marques. At first I thought that this was addressed to a submariner, until I realised that “cabo submarino” translates as “submarine cable”. H.B. Rock must have been an engineer or a sailor working on a cable-laying ship, or shore-based at the terminal station at Lourenco Marques. Perhaps Lew and HB were brothers, one working on a cable-laying ship in the Indian Ocean with correspondence affected by the Boer War, and the other a sailor on a gunship on the Yangtse River, protecting British interests following the Boxer Rebellion. The family reunions must have been fascinating!