Rare Perforations and the German Luftwaffe

Here is a question which few philatelists will be able to answer. Why do we have the German Luftwaffe of the Second World War to thank for a number of rare stamps from the British Commonwealth?

In September and again in December 1940 the Bunhill Row, London, works of the printers De La Rue & Co. received direct hits from bombs and the premises, which had been purpose built for the printing company in 1874, were destroyed. Although the company moved into other premises, several stamp printing and perforating contracts were affected. De La Rue’s normal comb perforating machines were all damaged as a result of the Luftwaffe’s bombing and in early 1941 a temporary line perforating machine was called into service. It was this machine which produced several of the rare line perforation varieties of the definitive issues of Bermuda, Fiji, Barbados and Kenya Uganda and Tanganyika.

It was on this line perforating machine that Jamaica SG 23a was perforated. Only 6,000 stamps were printed and all the sheets were sent to the colony, with none available for distribution to British dealers. This is the reason for the big variation in catalogue value of this stamp between mint and used; the only way to acquire a mint copy was from the colony. Used stamps are also scarce and they are normally found with quite a heavy parcel cancel. The stamp was a high value and would have been used almost exclusively on parcels.

This line perforated stamp is well worth looking for, as few collectors are aware of the difference and how to spot it. A comb perforating machine perforates a row of stamps on three sides and then moves on to the next row to perforate that on three sides, whereas a line perforating machine perforates a row at a time and the sheets are then fed back into the machine at right angles and the columns are perforated a line at a time. This results in non-uniformity at the intersection of the horizontal and vertical perforations and corner perforations can have elongated holes or extra long teeth. This feature is clearly visible on a block of four, but interpreting it on a single is more difficult without experience.

A local collector showed us a mint copy of the Jamaica 1938-52 5/- value, which appeared to have a line perforation, rather than a comb perforation. We agreed and suggested that it be submitted for expertisation to enable us to offer it in auction on the collector’s behalf. The stamp (SG 23a) was returned to us with a “good” certificate and it was offered in the February 4 2015 Warwick and Warwick auction, where it realised £2,596. This rare stamp owes its genesis to bombing raids of the Second World War and its discovery to an eagle-eyed collector. 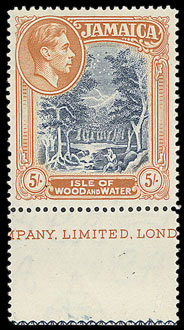 Jamaica 1938-52 5/- marginal with line perforation. The intersection of the horizontal and vertical perforations are not coincident and this is shown especially in the lower right corner of the stamp. 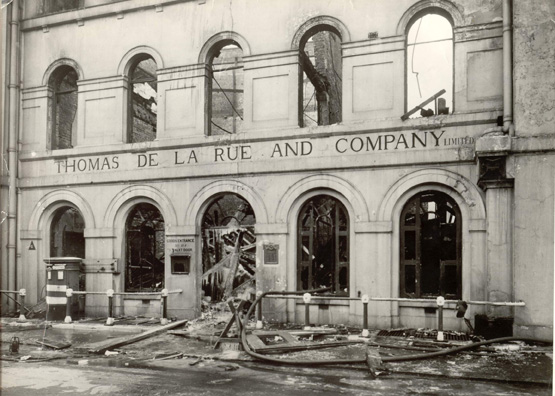