The Corsini family are one of Florence's most eminent families. Their well-known name originates from the “Pesa” valley, between Siena and Florence, from around the end of the 12th century.

One of the most important families in Italy, they initially made their money in London in the textile trade and early banking operations, but are probably now most famous for two things:

The Corsini Collection: A series of Masterpieces from the 14th to the 20th century by various major European artists.

The Corsini Letters: A series of more than 3,500 letters charting their trading history from 1567 to 1637 - some of the earliest material of its kind relating to the European economy.

Here at Warwick & Warwick, we were asked to offer more than 40 of these fascinating postal entires for sale - a delightful experience both for us and collectors of early postal markings.

The Corsini Letters’ importance in an era of unofficial postal communication

As an experienced valuer and auctioneer, I’ve come to the conclusion that age is relative as far as collecting goes. Many times, at a valuation day, visitors remark that their stamp collection contains really ‘old’ stamps - only for me to discover there is nothing which pre-dates the reigns of George VI or George V. Likewise, coins minted in the reign of Queen Victoria are often referred to as ‘old’ until it is pointed out that Roman coins, which are plentiful, date back approximately 2000 years.

When one considers postal communication, the Corsini Collection is amongst the oldest material of its kind.

There was no official government run system of postal communication in this country until the 17th century, although several cities ran posts, including Bristol, which had a foot post to London as early as 1532.

In the 1980s, the auction house Robson Lowe held two auctions of late 16th century correspondence sent to the Corsini family, who were then resident in London. This archive was the only commercial correspondence addressed to the City of London known to have survived the Great Fire of London in 1666 and the condition of practically all of the entries was very good.
The archive was sold and dispersed to collectors all around the world and now, many years later, these secondary collections are coming onto the market – as was the case when our auction house was asked to offer more than 40 of these fascinating entries for sale.

In 1599, a merchant wrote to the Corsini Family in London, advising them of his purchase for them of 30 tons of lead at £7 12 shillings per ton. He addressed his entire “To his lovinge Frinde Mr. Phillipe Corsyny, merchante, deliver thes, in London". It was carried by messenger, on horseback, taking 3 days. 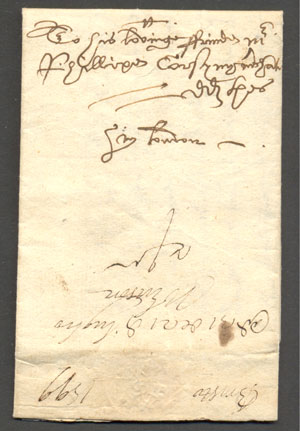 Bristol. 1599, 28th July, 1 page entire to Phillipo Corsini, from John Whitson, a famous merchant, who became Mayor and was elected to parliament 4 times, addressed "To his lovinge Frinde Mr. Phillipe Corsyny, merchante, deliver thes, in London". It was carried by messenger, on horseback, taking 3 days before there was any public postal service in Britain and is rare thus. The letter refers to a purchase of 30 tons of lead for £7-13-0 per ton. Only a handful of Bristol covers were found in the Corsini archive.

Perhaps the most important letters in this particular collection are two entires written by Bartholomew Corsini himself, one dated 1589 and the other dated 1594, both addressed to a Venetian merchant. 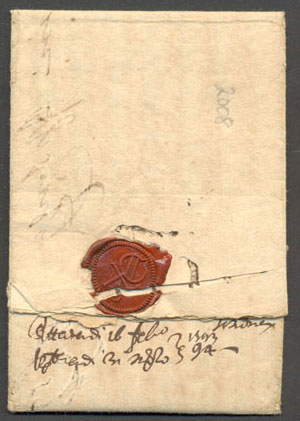 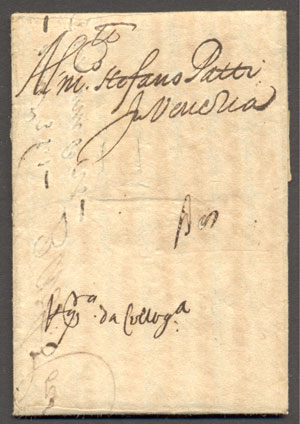 In total, only 11 entires written by Bartholomew Corsini have been recorded and only two are known with postal markings. The 1594 entire bears the postal markings of the Thurn and Taxis Post, which was operating from Cologne to Venice, and the Corsini family’s own couriers, who would have carried it as far as Cologne.

There may not have been any official government run system, but the Corsini collection proves that the postal system created by the 16th century merchants certainly appeared to be very efficient.

Do you own a collection of rare postcards or some postal history which you’d like to be valued? If so, get in touch - our experts will happily offer their expertise for free.