It is quite rare to come across a community which has failed to realise the financial benefits to be derived from selling postage stamps to collectors.  Stamp collecting in the U.K.apparently started soon after the penny black appeared in 1840 and the Warwick and Warwick library contains examples of stamp catalogues dating from the 1860s. Philatelic revenue was a force to be reckoned with by the turn of the century and there are many examples of it being taken into account, when new stamps were issued. Examples of this are the overprints on New Zealand stamps for use in Antarctica by British expeditions in the Edwardian period. (See my article Ewens’ Archive, Philatelic Trading 100 Years Ago, published in this library.) These were marketed to philatelists at many times their face value in order to partially subsidise the expeditions. It could hardly be argued that they were introduced through practical necessity.

Long Islandwas a British possession in the Aegean Sea, where a British ship found itself marooned during World War I. It is currently part of Turkey and called Chustan (or Keustan). The captain of the ship was Lieut-Cmdr. H. Pirie-Gordon and he produced his own stamps on a typewriter on board. Although some of them were used, mainly by Pirie-Gordon as novelty items, the majority were sold by him for many times their face value at the end of the war.

However the philately of the island of Pitcairn in the south Pacific is a little different. The story of the settlement of Pitcairn is well known. Sailors aboard H.M.S. “Bounty”, under the command of Captain Bligh, mutinied and set Bligh and his officers adrift in an open boat. The 9 mutineers, led by Fletcher Christian, settled on Pitcairn in 1790, together with Polynesians they had brought along from Tahiti. The colony was not visited until 1808, when an American whaler called at the island. At the time the community was self-contained and had no need or wish to communicate with the outside world. The earliest known letter from Pitcairn is dated 1849, but it was not until 1920 that a regular mail service via New Zealand was introduced. Free transport of mail was permitted as long as the envelope bore a handstamp or manuscript endorsement. The recipient would pay the postage at the normal rate. There was no internal mail system, the island being only 2 miles across, and stamps were unnecessary. A large range of handstamps were in use between 1920 and 1926 when the unpaid letter concession was withdrawn by the New Zealand Post Office. 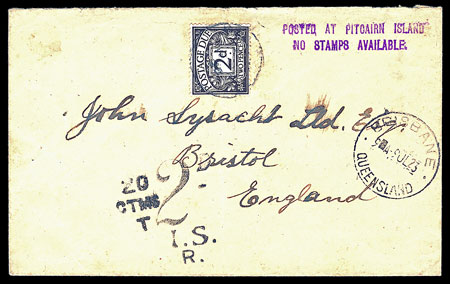 This 1923 cover bears the handstamp “POSTED AT PITCAIRN ISLAND / NO STAMPS AVAILABLE”. Postage to the value of 1d should have been collected on delivery in Bristol, but mail from Pitcairn was so unusual that the postal clerks did not know how to deal with it and postage dues at double the postage rate were applied. 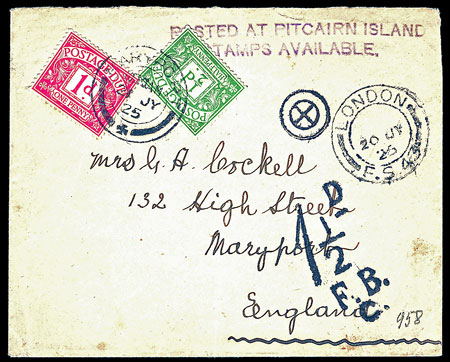 1925 cover from Pitcairn to England, bearing a handstamp with larger letters. On this occasion the correct amount of postage has been collected. 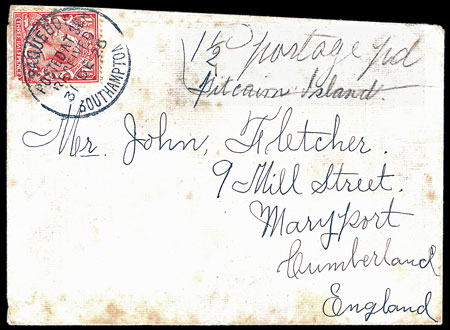 This envelope was sent to England by Lucy Christian, during the short interim period between the withdrawal of the rubber handstamps in March 1926 and the setting up of the New Zealand postal agency on June 7th 1927. She probably paid the captain or purser of the British ship that called at the island the 1½d postage. Only British ships could supply British stamps to mail posted at sea. The cancellation applied was a paquebot mark of Southampton. The sender has written in the top left corner “1½d postage pd./ Pitcairn Island”.

After representations by Pitcairners, a New Zealand postal agency was created on the island from June 1927.New Zealand stamps were provided for use and the philatelic revenue which could have been raised from philatelists eager to collect postage stamps from a remote island in the Pacific was missed until October 15th1940, when Pitcairn started to issue its own stamps. Today philatelic revenue is one of the main revenue streams on the island, with thousands more collectors of Pitcairn stamps in the world than Pitcairn residents.