Essays and Proofs of the Spanish 1876 Alphonso XII Issue

In March 2013 Warwick and Warwick sold by auction a collection of the 1876 Alphonso issue of Spain, which won the Junior Philatelic Society Trophy in 1949 and which had not been seen on the philatelic market since.

Spain’s monarchy was restored in 1875 and a new set of definitives were required depicting the head of the monarch, King Alphonso XII. The head of the Spanish Commission in London was called on to locate an artist to design a stamp based on a photograph of the King’s head, which was supplied by the Sociedad-del-Timbre in Madrid. The artist selected was Alfred Benjamin Wyon who, together with his brother, had a Royal Appointment as Chief Engraver of Her Majesty’s Seals. This magnificent collection contained a comprehensive range of essays and proofs, starting with the artist’s original sketches, through rejected hand-painted essays, to die proofs and colour trials of the accepted design and the first printings by Bradbury Wilkinson & Co. Many items were unique and the collection superbly told the story of stamp design in the late 19th century. A few of the items from the collection are illustrated here. 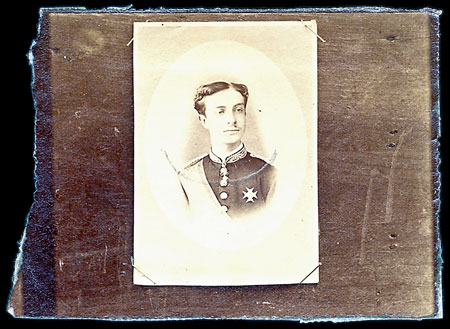 The official photograph, supplied by the Sociedad-del-Timbre, in Madrid, which was sent to London, so that the engraver could copy the likeness into the centre of his design. This is probably a print from the studios of the engraver, Alfred Wyon, or the printers, Bradbury Wilkinson. 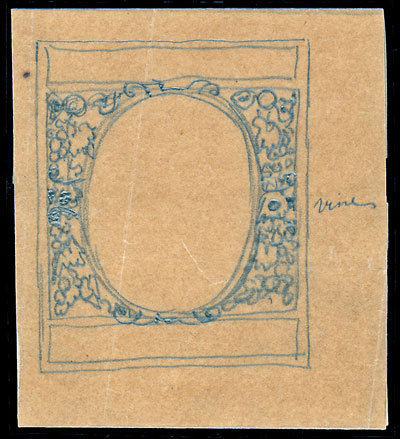 One of three original pencil sketches, on tracing paper, for the design of the frame, made quickly and roughly by Wyon. 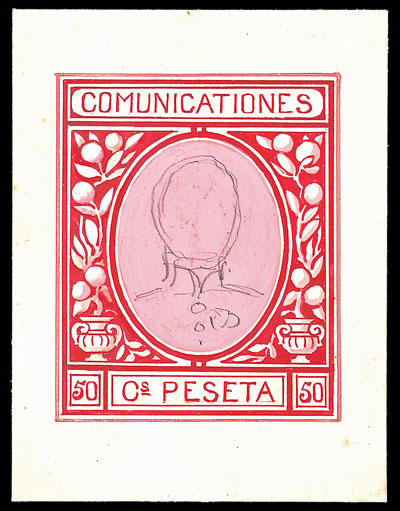 Beautiful and unique hand-painted essay by Wyon, in deep carmine, showing an oval frame surrounded by pearls representing a rosary, with a background design of branches of oranges. The collection contained two further hand-painted essays, one with ears of wheat replacing the branches of oranges and the third with cockle shells. None of these designs were accepted. The realisations were £460, £460 and £529 respectively. Interestingly Wyon uses the “COMUNICATIONES” spelling with a “T” rather than the more usual “C”. 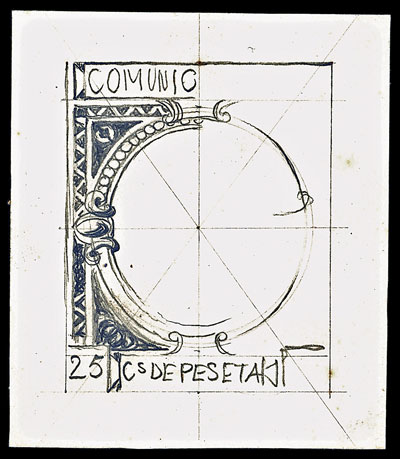 A further essay by Wyon, this time in pencil, showing frame detail. This type of decoration dates from about 1680. It was used as a surround in heraldry and old maps and is used in architectural detail. The realisation was £391. 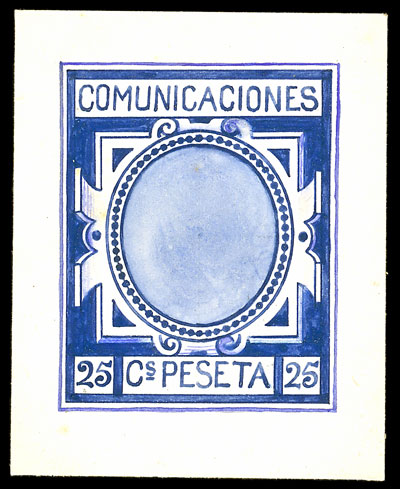 Hand-painted essay by Wyon, in deep blue. There was a similar one in the collection in a lighter shade of blue. This was the frame design, with minor modifications, selected for the issue. Offered together, the two essays realised £977. 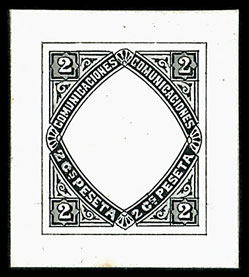 Bradbury Wilkinson artists also produced essays of frame designs, in Indian ink, in the same size as the proposed issued stamp. The penmanship is impressive. 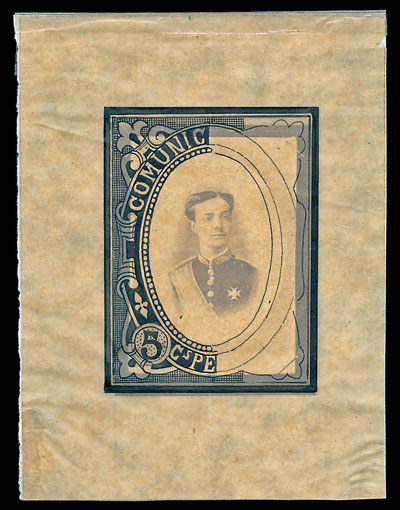 This is a transparent overlay of a suggested frame design on the official photograph of the monarch. It was executed by a Bradbury Wilkinson draughtsman and the detail is impressive. It realised £380. 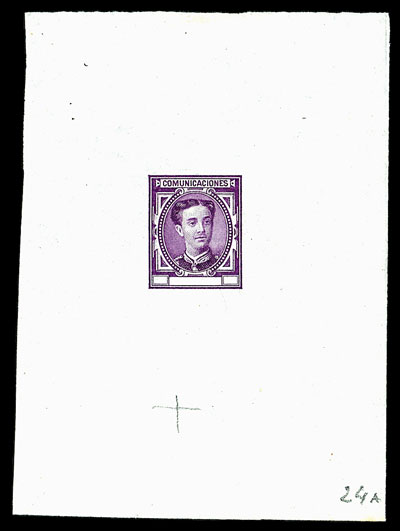 The collection contained 9 colour trials of the issued design, with blank value tablets. The colours are far more intense and vivid than those of the Spanish issues which preceded them. Offered together, they made £1,725. 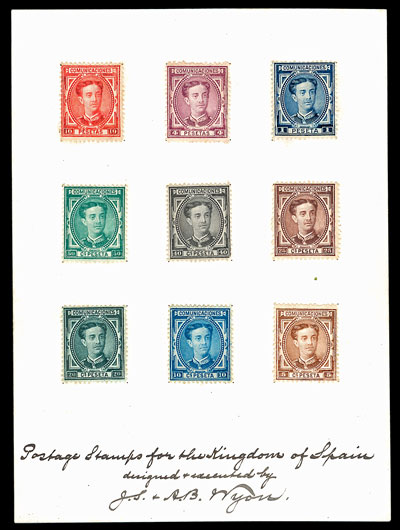 The full set of 9 stamps as issued, attached to a card with the inscription “Postage Stamps for the Kingdom of Spain designed & executed by J.S. & A.B. Wyon”, in the handwriting of Allan Wyon, brother and business partner of the designer. Realisation £138.