A philatelic trading company, Ewen’s Colonial Stamp Market Ltd., was trading around the time of the First World War and an archive of correspondence and ephemera, relating to the company, was auctioned by Warwick and Warwick, in August 2009. It gave a fascinating insight into the trade in those turbulent times. 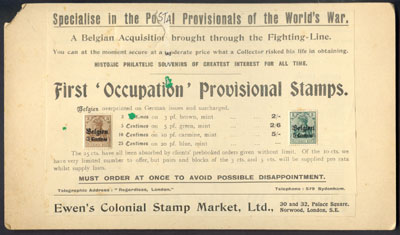 In the archive was an advertisement for German stamps overprinted “Belgien” and surcharged in Belgian currency, that were issued for use by the invading German troops. The advert states “A Belgian acquisition brought through the fighting line. You can at the moment secure at moderate cost what a collector risked his life in obtaining.” The Evening News published a report on October 22nd 1914 accusing Ewens of trading with the enemy, which was illegal. “None of these stamps have gone through the post, but by buying them stamp dealers and collectors are trading with the enemy.” However the Evening News published a retraction on January 25th 1915, when Ewens assured the paper that the stamps had been obtained from 2 Belgian refugees. Ewens’ attitude towards the weekly stamp magazine Stamp Collecting was not as benevolent. In the issue dated December 11th 1915, an article accuses Ewens of being unpatriotic and refers to the scandal of the Hun labels. However Ewens issued a writ against Stamp Collecting and this lead to a withdrawal and apology in Stamp Collecting, dated January 22nd 1916. 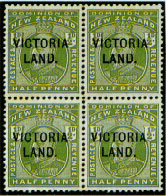 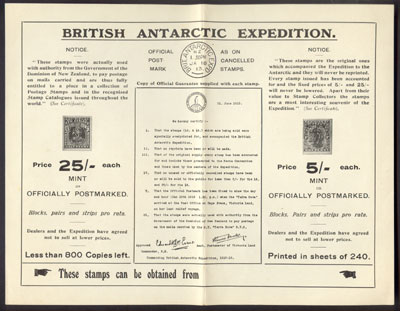 Elsewhere in this fascinating archive was a flyer published by the British Antarctic Expedition, which it distributed to stamp dealers wishing to sell Victoria Land stamps on behalf of the expedition. These stamps had been overprinted on the authority of the New Zealand Postal Department, primarily to raise revenue from collectors to help pay for Scott’s 1911 expedition to the South Pole. The ½ d could be purchased either mint or used with the expedition postmark at 25/- each and the 1d at 5/- each. The flyer bears the sentence “Dealers and the Expedition have agreed not to sell at lower prices.” 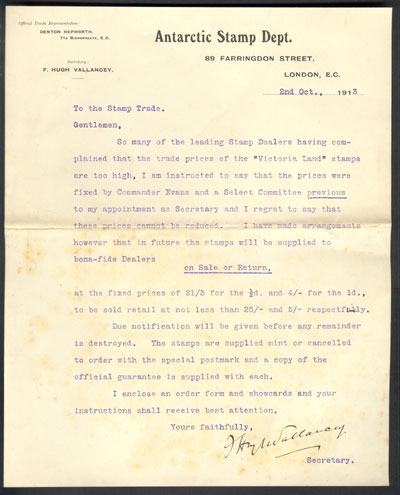 There was clearly an outcry from the collecting public at being asked to pay 600 times face value for the ½ d and 60 times for the 1d., as a circular from the Antarctic Stamp Department, addressed to the stamp trade, explained that the retail prices could not be lowered as they had been fixed by Commander Evans. However the stamp trade could purchase the stamps on a sale or return basis, with a moderate discount.

The milking of the stamp collector by stamp issuing authorities is a time-honoured tradition.