The Northern Ireland Mention in Dispatches group to Warrant Officer Class 1 Regimental Sergeant Major William Malarky, Black Watch, was offered in our December 2009 auction, on behalf of the recipient, with an estimate of £1,700. It attracted considerable attention from the bidders and eventually realized £5,750. 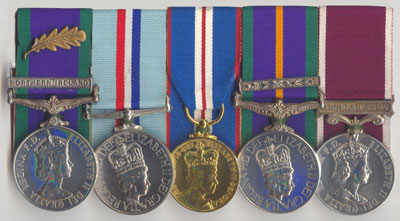 William Malarky enlisted in the Black Watch (The Royal Highland Regiment) on 8th August 1972 in Edinburgh. He served in 5 tours of Northern Ireland in 1975, 1976-77, 1982-83, 1985-86, 1990-91, tours of Hong Kong, Brunei, Belize, Germany, Rhodesia, Canada, Italy and Berlin. It was after the 1983 tour that as a corporal, he was Mentioned in Dispatches which was announced in the London Gazette dated 28th October 1983. It was awarded for outstanding service as the Divis Flats OP commander during the Black Watch 1983 Belfast tour. 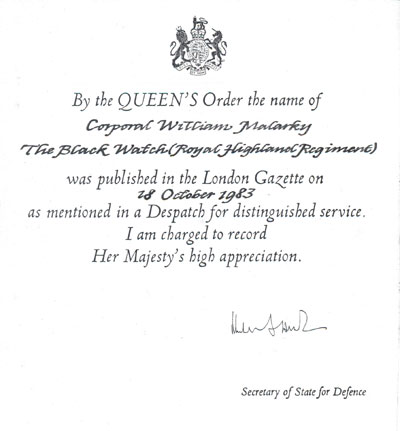 Divis Flats was a 15 storey block of flats on Divis Street in Belfast where the Army had had an Observation Post (OP) since 1969, as it dominated the surrounding built up area. Every movement into and out of the OP perched on top of the flats was a battalion operation. There was a secure lift up to the top of the flats, and then someone within the OP would open the steel trapdoor and lower a ladder to allow access. The OP was manned by a 6 man team which Cpl Malarky commanded for most of his tour from December 1982 to May 1983. This sensitive position was under constant threat with its position known to the terrorists and all movement of personnel and re-supply being a potential target.

He reached the career pinnacle of WO1 RSM of Tayforth Universities OTC and was discharged on 22nd July 1997 on completion of his engagement. The summary of his Service Record states:

I have no hesitation in recommending WO1 Malarky to any prospective employer as a man of total integrity and loyalty who is not afraid of hard work and is prepared to try his hand at anything. He is very much a team player, which has been proved not only on the sportsfield, where he has represented his country and the Army, but also on Active Service, and I would expect him to settle into any new job very quickly. The Army’s enormous loss in WO1 Malarky’s departure will undoubtedly be the gain of his new civilian employer.

However he re-enlisted immediately on 24th July 1997 in the Royal Irish Regt (Home Service Part Time) as a CSgt and served with the 4th Bn in Counties Fermanagh and Tyrone. He was awarded a GOC’s Commendation in 2002 “in appreciation of your exceptionally valuable service in Northern Ireland as a Platoon Commander from July 1997 to March 2002.” He was discharged in January 2007 on the disbandment of the Royal Irish (HS) having completed nearly 37 years service. 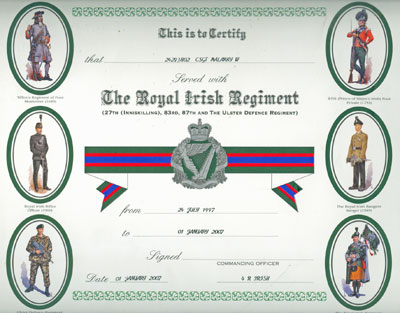