The sending of Christmas cards by post increased dramatically in late Victorian times. In those days delivery of mail by the following day was expected as the norm and those sending Christmas cards would delay posting them until December 23rd or 24th in anticipation of delivery on Christmas morning. In 1877 a proposal was made that letters intended for delivery at Christmas be posted a week beforehand, in order to give the post office staff time for sorting, with a label affixed to each envelope, showing the day and time it should be delivered. Further proposals were made in the 1880s, including a proposal for a Christmas label to be attached to each item of mail intended for delivery on Christmas morning. Nothing came of these proposals.

On September 13th 1902, the Surveyor of Manchester, John Phillips, wrote to the Secretary of the Post Office suggesting an experiment whereby members of the public could hand in items for local delivery on Christmas day, between the dates of December 17th and 22nd. There would be no additional charge for this service, but mail handed in would be handstamped with a special cancellation so that the recipient would know that the delay was intentional. Rochdale was the town selected for the experiment and the handstamp supplied bore the inscription “POSTED IN ADVANCE / FOR DELIVERY / ON / CHRISTMAS DAY / 1902”. Strangely, there was no mention of the town name, despite the fact that Rochdale was the only town conducting the experiment. The handstamp was applied in red on the ½d green stamp on postcards and unsealed letters and in black on the 1d red stamp on sealed letters. 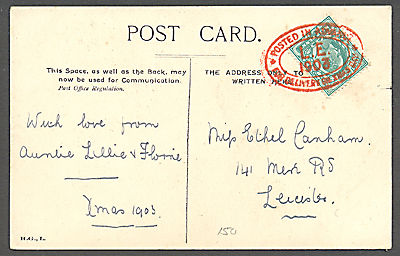 The scheme was successful and almost 19,000 items of mail were processed. The authorities decided to extend the scheme to 28 towns for the 1903 Christmas post. The cancellation employed by all the towns, except Cheltenham, which used an undated double circle, was a double oval with the inscription “POSTED IN ADVANCE / FOR DELIVERY ON XMAS DAY” between the ovals. In the centre was the telegraphic code of the town in question, with the year 1903 beneath. The Surveyors of the 28 towns reported varying degrees of success. Total postings at Clevedon were 178 and no examples have survived. Even some of the larger towns, like Shrewsbury, Dover, Cork, Waterford and Knutsford recorded less than 1,000 usages. However 250,000 items were processed at Manchester and 26,000 at Rochdale, which of course was in the second year of the experiment. 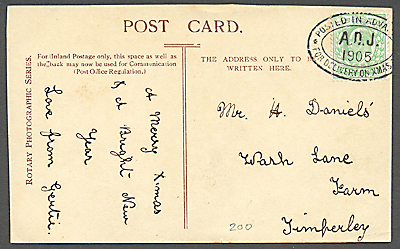 It was decided to try the scheme again in 1904. Of the 28 towns participating in 1903, only 9 tried again in 1904, but these were joined by 5 new towns, bringing the total that year to 14. The handstamps deployed remained the same as those used in 1903, with a different year date. In 1905 the number of towns continuing with the scheme was 6 and these were joined by 2 more, Eccles and Stockport. The scheme continued to thrive in Manchester, so much so that an additional rubber handstamp was introduced in 1905, in the form of an oval parcel handstamp, inscribed “MANCHESTER / ADVANCE POSTED / CHRISTMAS 1905”. This handstamp was not used exclusively on parcels however and a further similar handstamp for 1906 was also supplied.

The dwindling success of the scheme would probably have lead to its abandonment completely after 1905, had it not been for an initiative of the Surveyors of Manchester and Liverpool. They reported that for Christmas 1906 the scheme would be extended allowing mail to be lodged in Manchester for Christmas day delivery in the Liverpool district and Southport, as well as locally in Manchester, and a similar scheme was introduced in Liverpool, though the same facility was not available at the Southport post office. 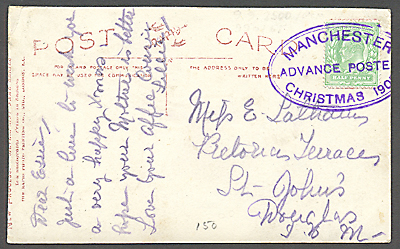 Estimated at £150, this example of the Manchester type 3 cancel realised £218.

A postcard exists of the 1905 Manchester “parcel” cancel on a card for delivery in Douglas, on the Isle of Man, so clearly the Manchester Surveyor was reporting on a fete accompli in his November 1906 report. 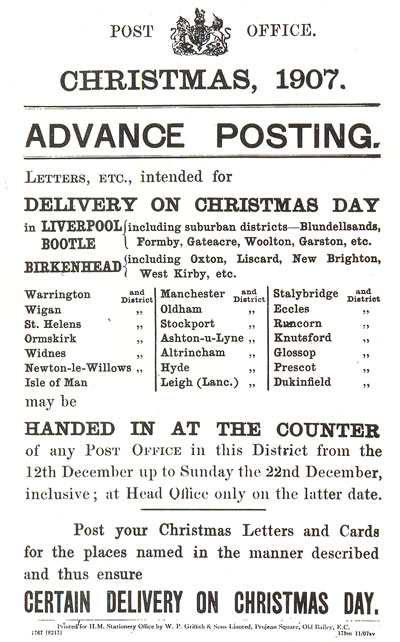 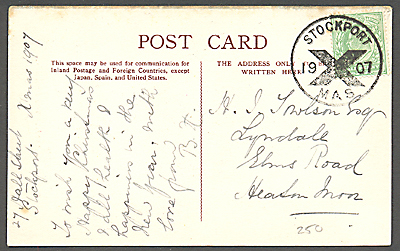 The Surveyors had handbills printed advertising the scheme and suggested that the handstamp be changed for a more striking design, bearing a large “X”, forming part of the word “Xmas”. This handstamp was used at 27 offices between 1906 and 1909. 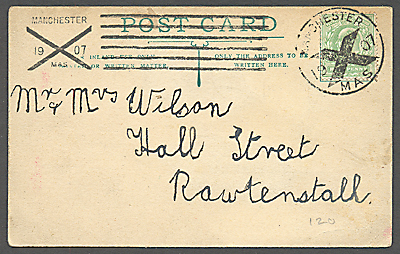 This 1907 card, posted from Manchester, has received both the type 4 cancel and also the type 5 Columbia machine cancel. Estimated at £120, it made £241.

The final type of cancellation used on mail posted in advance for Christmas delivery was a modification of the Columbia machine cancel. Manchester was processing such a large amount of mail that it found it necessary to use a speedier cancellation process. Five different types of Columbia cancel were in use in Manchester in 1908 and 1909.

In 1908 and 1909 in towns where the scheme was still in operation, letters and cards were accepted in advance for Christmas day delivery to all parts of the country. However, despite this opening up of the scheme, its popularity still varied greatly from town to town. On July 5th 1910 the Secretary of the Post Office wrote to the Postmaster General,

‘It is obvious that to secure any real relief and to affect appreciably the postings on the 23rd and 24th December the advance postings must be very heavy, but it will be seen from the statement showing the number of letters posted under the system since its inception in 1902, that the results hitherto obtained have proved very disappointing......There seems little doubt that most people do not care very much whether their Christmas Cards are delivered on Christmas Day or a day or so before or after......The slight relief which may have been afforded by the adoption of the system at particular towns such as Manchester and Liverpool, is hardly sufficient to justify a repetition of the experiment in view of the expense and extra trouble involved and of the fact that similar arrangements cannot be applied generally.’

After 8 years of experimentation the scheme came to an end, but it has left the collector of Great Britain postmarks with a fascinating field of study, with the possibility of additional finds in the future.

An important collection of these fascinating postmarks went under the Warwick and Warwick hammer on Wednesday 3rd August 2011. The highest realisation achieved was £690 which was paid for a practically complete impression of the Ashton under Lyne1907 type 4 cross.