As an auctioneer, I see rare stamps quite often. Each one of our monthly auctions will contain several copies of stamps which the average collector would rarely have the chance to acquire for their collection and would only see “in the flesh” on the odd occasion in a dealer’s stock, in a public auction, or at an exhibition.

Every day, I inspect GB £1 PUCs and 1840 1d blacks, or stamps of similar desirability from other countries. However, in October 2012, I encountered a stamp I had not had the pleasure of handling since 1978 - when last we auctioned it. That stamp is the 1910 2d Tyrian plum of Great Britain. 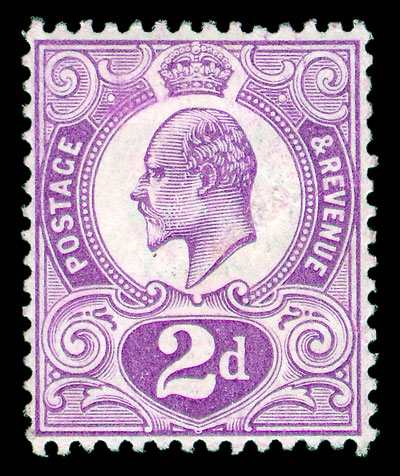 The GB 1910 2d Tyrian plum history and its origin

In 1909 it was decided to change the Jubilee design of stamps and make them mono-colour. The 7d grey was introduced on May 4, 1910 and a new design of the 2d., in a shade called Tyrian plum, was intended to be issued on May 6. However, King Edward VII died on May 6 and it was decided not to go ahead with the issue – now known as the 2d Tyrian plum stamp. All the post offices were informed that they were not to issue the new stamps and had to return their stock, which was subsequently destroyed.

Thankfully, for philatelists, not all the Tyrian plum stamp stock was destroyed and in 1950 the General Post Office exhibited a complete sheet, less one corner copy, at the 1950 stamp exhibition at Grosvenor House. Apart from this sheet, several other copies have survived including a pair in the Royal Stamp Collection.

Only one used copy of the Tyrian plum is known, also in the Royal Collection. A friend of George V was able to obtain a copy of the stamp and mail it to the stamp collector Prince of Wales (as he was then) on May 5.

It is thought that between 8 and 12 mint copies of the 2d. Tyrian plum exist in private collections. Copies of the stamp with SPECIMEN overprint are also known, so at least one sheet of these appears to have survived.

It is interesting to note that the general public at the time imagined that the 7d. grey stamp, issued only 2 days before the King died, was issued as a mourning stamp. Clearly this was never the case.

In October 2012, I had the pleasure and honour of seeing and handling (very carefully) a mint 2d Tyrian plum, which was part of the Commander Hugh Simpson collection, which weareoffered in auction.

This particular copy had been locked away in the Simpson collection since 1956, when it was purchased from the Per Gjerding collection at a hammer price of £310.

I doubt I will ever have the pleasure of seeing that particular rare stamp again before I die. Ah well, back to the £1 PUCs and 1d blacks!