I have always thought of booklets as being a practical means of transporting postage stamps for use on correspondence; that is until 1969 when the British Post Office introduced the concept of so-called "prestige" booklets. The prestige was, I suppose, meant to be attached to the product of the advertiser/promoter of these extravagant publications. However in my view it resulted in a loss of prestige by the Post Office, in its never-ending quest to milk the collector who is committed to buying one of everything. The cynicism of this move was demonstrated by the inclusion of a "one off" new issue, such as the ½ p side band in the 1971 £1 Wedgwood booklet, which necessitated spending £1 to acquire a stamp with a face value of ½ p.

It was quite refreshing therefore when we were approached by a client with a comprehensive collection of booklets, all predating the "prestige" era. This inherited collection was located partly in Dorset and partly in Yorkshire and involved journeys in opposite directions to secure it. However it has proved very worthwhile as, in total, the value exceeds £25,000.

The first G.B. booklet was issued in 1904 and contained 24 1d stamps. The cover price was 2s 0½d, there being a ½d premium payable for the convenience. 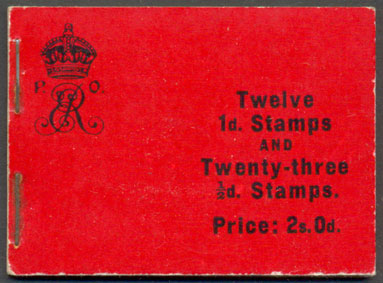 By 1906 it was decided that the cover price was an inconveniently odd amount and it was changed to make it a round 2s, but instead of absorbing the booklet production cost, the Post Office reduced the contents to 12 1d stamps and 23 ½d stamps. The position of the 6th stamp on one of the four ½d panes was taken up by a cross printed in the same green colour as the stamps. Collectors know this as the St. Andrews cross label and stamps with the label attached se-tenant are collectors' items, as are the complete booklet panes. This arrangement continued for all of the booklets issued in the reign of K.E.VII.

In 1907 the Post Office was authorised to accept advertising on the booklet interleaves and despite canvassing 24 selected companies, none placed adverts. So, in the 1908 issue, the Post Office used the glassine interleaves for its own publicity. Advertisers changed their minds a year later and the 1909 and 1910 issues contained advertisements for six companies on paper interleaves. It was necessary to send voucher copies of the booklets to the advertisers to show that the advertisement had been printed, and a variety of pre-cancels were applied to the stamps in order to invalidate them for postal use. From 1926 onwards the word "CANCELLED" was applied instead and from 1928 this was accompanied by a punched hole in the shape of a cross.

On reflection, perhaps I'm being a little naive in my condemnation of prestige booklets, after all it is only a logical progression from the advertising permitted in the 1909 issues. Though it would take a lot more discussion to convince me that the St. Andrews cross label was the forerunner of the ½p side band! 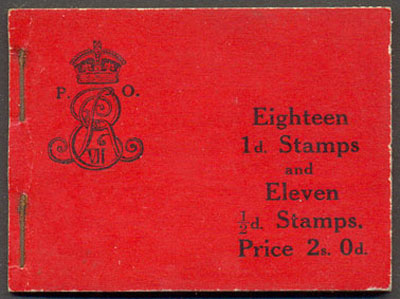 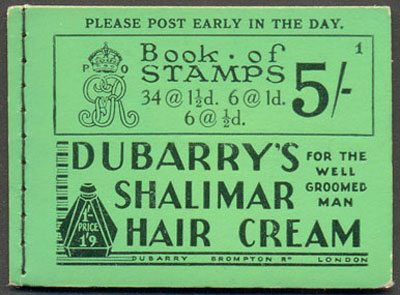