GB errors of denomination & stamps with mistakes worth a fortune!

British stamps with errors of denomination are few and far between. They usually arise when the Post Office has raised postage rates after the printing of a commemorative set and before its release.

Here at Warwick & Warwick, we have been fortunate to see and handle quite a number of significant error stamps in recent years – which always attract great interest at auction.

The 1988 Christmas 13p is a fine example of a stamp with an error of denomination appearing on the open market. They had been printed by the Post Office and were ready for distribution to the post office branches when a rate rise was announced for 2nd class postage, from 13p to 14p. This was just prior to Christmas and the Post Office wanted to profit from the massive increase in usage of 2nd class postage caused by the mailing of Christmas cards. The additional revenue gained from the rate increase would dwarf the cost of reprinting the 2nd class postage stamps.

Very quickly, the Post Office organised the reprinting of the 13p Christmas stamp in the denomination 14p. All of the stock of stamps inscribed 13p was destroyed.

However, the story goes that they had overlooked the fact that work had started on the insertion into the 1988 yearbooks of the 1988 commemorative issues, including the 1988 Christmas set containing the 13p denomination. A certain number of these yearbooks were subsequently sold containing the 13p stamp, which should not have been issued.

Warwick and Warwick were one of the first auction houses to report this find and auction one of these stamps back in August 1989 (as shown in the press clipping below). 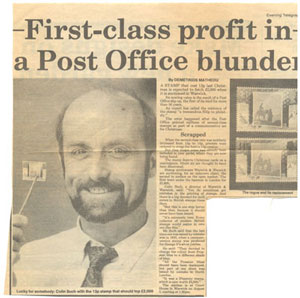 The mint stamp sold for more than £3,000. Several have surfaced subsequently and it is now catalogued at £12,000 in mint condition.

In September 2010, a Warwick & Warwick auction contained an interesting Royal Mail first day cover of the full set of five 1988 Christmas stamps, including the rare 13p denomination rather than the correctly-issued 14p denomination.

The cover was postmarked at Paddington on November 15th, the official first day of issue. This suggests that not all of the 13p errors came from the 1988 yearbooks, as it is unlikely that a collector would have purchased a yearbook on the day of issue and immediately removed one of the sets of stamps to affix to a first day cover.

At present, 10 of these stamps have been recorded in mint condition - 1 used and 3 on first day covers. The cover realised £2,760. 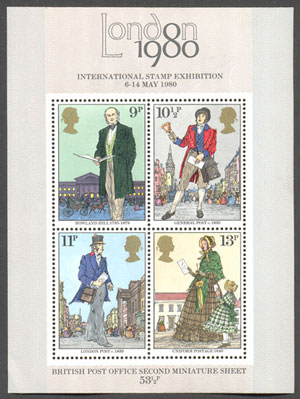 In a February 2011 sale, we were privileged to offer another rare error of denomination.

The current catalogue price is £40,000 - proving how much British stamp errors and misprinted stamps are potentially worth.

If you have a stamp with a denomination error or any other rare stamps which you’d like to be valued, please get in touch for expert assistance.