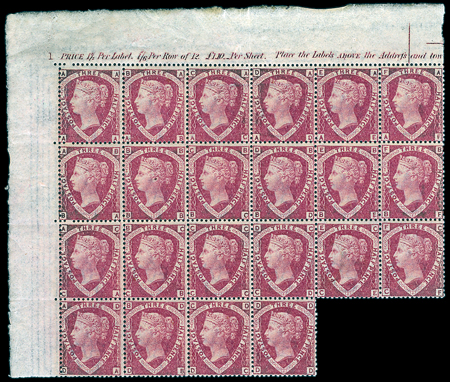 Large multiples of Victorian stamps are very rare and I find them most appealing. Warwick and Warwick had the pleasure of auctioning a wonderful large multiple of the Great Britain 1870 1½d lake-red, in the February 2014 auction. It was a block of 22 unused stamps from the north-west corner of the sheet and had selvedge along two sides. Selvedge on the G.B. line engraved issues is delightful as it not only bears the plate number (in this case plate 1), it also bears details of the cost of a single stamp, a row of 12 and the price for a full sheet. However the inscription which most collectors enjoy reading is the instructions to the postal user as to how to employ the stamp. The complete inscription along the top margin reads “Place the Labels ABOVE the Addrefs and towards the RIGHT HAND SIDE of the Letter. In Wetting the Back be careful not to remove the Cement.” Our multiple had all of the inscription and instructions up to the word “towards” and was a most handsome piece. It realised £5,290. A further interesting fact shown up by the multiple is that one of the vertical columns of perforating pins was missing when the sheet received its perforations. This is the 3rd vertical column, below the marginal inscription “PRICE”.

The history behind the issue of the 1870 ½d and 1½d stamps is interesting. From 1840 to 1870 only 1d and 2d stamps had been issued, reflecting the postage rates for inland letters of ½ ounce or 1 ounce. A newspaper stamp tax existed from 1712 until 1855 and if the newspaper was folded in such a way as to display the impressed Stamp Office handstamp, it would be conveyed free of postage. After 1855 printed 1d labels, similar in appearance to the tax handstamps, were affixed to newspapers which were mailed to subscribers, in order to pay the postage. In 1870 however the postage rate for inland newspapers, printed matter and samples, not over 2 ounces, was reduced to ½d and it was felt appropriate to print stamps of ½d and 1½d denominations covering the 2 ounce and 6 ounce rates, there already being a 1d value available to cover the 4 ounce rate. Additionally ½d newspaper wrappers were also printed, the British Post Office following the lead set by other countries such as U.S.A. (1861), New South Wales (1864), North German Confederation (1868) and Victoria (1869). Interestingly, newspaper wrappers are no longer in use anywhere in the world according to Wikipedia, which reports the last countries issuing them as Australia (1980), Ireland (1984), Barbados (1990) and Cyprus (1991).

There had been a demand in 1860 that the newspaper postage rate be reduced and a 1½d stamp was prepared (presumably for the 6 ounce rate). However Parliament refused to sanction the change and the printing had to be destroyed. Of the 10,000 sheets printed, 8,962 sheets were destroyed and today only a few copies survive in unused condition. This 1860 printing was in a rosy mauve shade.

An interesting variety of the 1½d stamp is the famous OP – PC error, where the stamp occupying the PC position on the sheet received, in error, O as a top left corner letter rather than C. This error occurs on plate 1 only in both the 1860 rosy mauve printing and the issued 1870 printing. Strangely, it was not recorded until 1894, 24 years later. Needless to say, the Warwick and Warwick multiple did not include the OP – PC error. That really would have been the icing on the cake!