Whenever I give a talk to a philatelic society or postcard club, I attempt to defray the cost of the overheads by staging a local valuation day, in the hope that someone will bring along a valuable property they want to sell. Thus I found myself in the delightful town of Shaftesbury, after presenting a talk to the Warminster Philatelic Society. The valuation day was not well attended, which gave me the opportunity to talk in depth to the people who came. 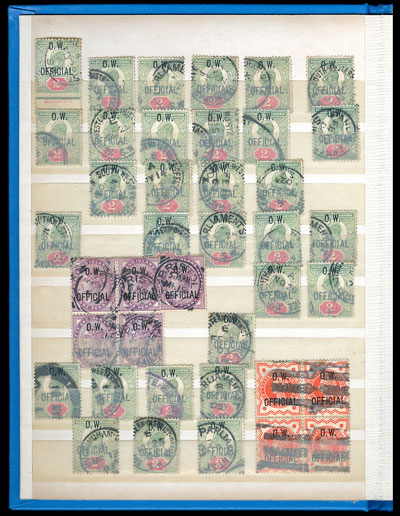 A gentleman showed me a small stock book containing a large number of G.B. stamps with Office of Works official overprints. My initial reaction was one of scepticism, as forgeries are common. However the owner went on to explain that his grandfather had been employed by the Office of Works and had been instrumental in getting the stamps introduced. The more the gentleman talked to me, the more interesting the story became and the more my scepticism evaporated.

Rowland Hill was the first to introduce a general official stamp in 1840, though this attempt failed, as the various government departments were largely autonomous and did not adopt the practise of using a specific stamp. The first government department to introduce their own overprinted stamps for the purpose of pre-paying postage was the Inland Revenue. The Post Office had opposed the idea and it was the Treasury who was the final authority and introduced the overprinted stamps in 1882.

Once the I.R. Officials were in use further government departments wanted their own postage stamps. In 1895, my client’s grandfather, Mr. E. Cropper, an Assistant Surveyor, wrote a letter to the Secretary of the Department, stating how inefficient the system was for the reimbursement of postage expenses and asking if a system of overprinted stamps could be introduced similar to that in operation in the Inland Revenue. The Post Office refused the request and suggested that they used perfins. These were produced with the initials “MM/OW” and later with a crown over “OW” but did not prove acceptable. A new Secretary of the Department was obviously more forceful and the “O.W. Official” overprinted stamps were authorised by the Treasury and 98 sheets of the ½ d and 249 sheets of the 1d were issued in March 1896. The stamps had to be paid for by the Office of Works at the time of issue rather than at the time of use and this made the Post Office less interested in security and the attitude of the department itself seems to have been quite casual. The prevailing attitude was that if a member of staff were to replace an overprinted stamp with an un-overprinted one of a similar value then no crime had been committed and it would be tolerated on a small scale. Nevertheless the number of stamps available for the philatelic market was very limited and inevitable many forgeries were produced.

My client’s collection comprised a vast, duplicated stock of Victorian and Edwardian OW Officials, all used, many on pieces, with a total overall catalogue value of £43,700! Included were no less than 33 of the Edward VII2d green and red (SG O38), catalogued at £400 each. These had all been saved by his grandfather, a very perceptive a gentleman!